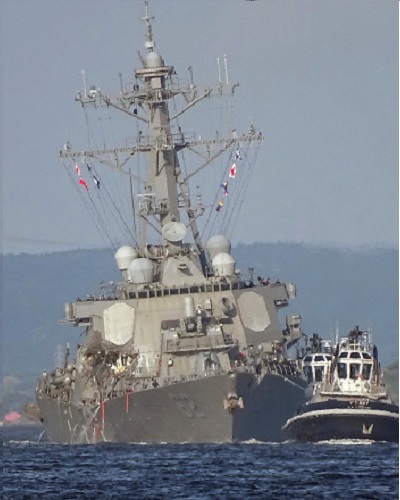 The damaged USS Fitzgerald is being towed by a tugboat in the waters near the U.S. Naval base in Yokosuka, southwest of Tokyo, after the U.S. destroyer collided with the Philippine-registered container ship ACX Crystal in the waters off the Izu Peninsula Saturday, June 17, 2017. The USS Fitzgerald was back at its home port in Japan after colliding before dawn Saturday with the container ship four times its size, while the coast guard and Japanese and U.S. military searched for seven sailors missing after the crash. (AP Photo/Eugene Hoshiko)

This Friday, A US Navy ship USS Fitzgerald crashed with a container ship near the Japanese port city of Yokosuka. Here, we will look into the crash incident and the loss and result of the crash.

The crash took place around some 56 nautical miles south-west of the Japanese port city of Yokosuka, at about 0230 hours local time early on Saturday. Japanese broadcaster NHK said the collision led to the flooding of the crew’s sleeping quarters while they were asleep.

“The damage was significant,”

“There was a big gash under the water.”

He also added that the repairs of the damaged ship would take some time to complete.

The marine traffic records suggest the ACX Crystal, a 222 m Filipino-flagged container ship, made a sudden U-turn roughly 25 minutes before the crash. It is not known yet why it changed its course. Similar records for the USS Fitzgerald however, are not publicly available.

The ship’s starboard side was heavily damaged in the collision, but the vessel later managed to slowly return to its base in Yokosuka, with the assistance of some US Navy tugboats.

It remains at the port in Tokyo.

Seven sailors were left missing and three injured after the collision, which as per the US Navy, almost sank the destroyer. The Navy said rescue workers found the bodies on Sunday after they were able to gain access to the damaged parts of the ship. It also said that the deceased ones would be taken to a Japanese hospital so as to be identified.

Also read The death of Dwarf actor Verne Troyer has been ruled as a suicide due to alcohol poisoning!

On Sunday, at a press conference in Japan, Vice Admiral Aucoin did not confirm how many remains had been found so far. He also said that the families of the sailors were being notified of the incident.

“This loss is something we all feel.”