Missy Elliott is a five-time Grammy award-winning artist and her debut album was able to be on top 3 on Billboard 200 list. Missy is currently single, know the list of men she dated!

She has had several relationships in the past. She was in a relationship with Olivia Longott in 2002 and broke up in 2004.

Missy also had an affair with Faith Evans in 1999 and Karrine Steffans in 2003. Moreover, she has also encountered Da Brat and Timbaland.

She has also talked about her desire to give birth to a child but is afraid of the physical pain in doing so. For the time being, there are not any rumors about her personal life and relationships. But, we will surely know if she decides to reveal her new relationship with us. 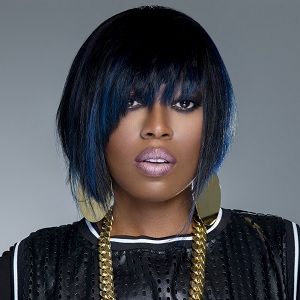 I'd stand on the side of the road when I was just a little girl singing on trash cans. People would roll down their windows saying, "Isn't she cute?". I had a vivid imagination. I always pretended it was some big stage. At family picnics they'd put me on the table and I'd just start singing.

The double chin's not good for the red carpet.

Who is Missy Elliott?

Missy Elliott is a Grammy Award-winning American rapper. Also, she is a dancer and producer. She is famous for her R&B, hip-hop, and rap songs.

People mostly know her for her great singles The Rain, and Sock It 2 Me. In addition, her best album includes, Get Ur Freak On, 4 My People, Work It, and One Minute Man.

Melissa Arnette Elliott was born on July 1, 1971, in Portsmouth, Virginia, the U.S. to Ronnie Elliott, father, and Patricia Elliott, mother. She is 50 years old. Her mother was a power company dispatcher and her father was a shipyard welder for U.S Marine.

Her ethnicity is All-American.

Talking about Missy’s childhood, she was raised in a poor family. So, many of her experiences were not too happy. Her father was abusive which resulted in fear by his own family.

The abuse was so intense that her mother suffered a physical injury. Furthermore, she was too threatened with a gun. However, she and her mother left her father and started to live at a relative’s home.

As regards Missy’s academic career, she has impressive past experience in her school. She was a very talented kid and as a result of her impressive exam results, she was promoted to the higher class.

Missy Elliott’s professional career started as a singer. Initially, she was associated with Sista, a female group. Furthermore, she also was part of Swing Mob, Total, SWV, and much more.

But the turnaround in her career came in 1997 with the release of her debut album Supa Dupa Fly. And with enormous success, it was able to be listed on Billboard.

Her second album Da Real World also got huge success and is still regarded as her best work. And consequently, she started to release her career-defining work in the albums Under Construction, This Is Not a Test, The Cookbook, and several others.

Missy Elliott also has made her appearances in television shows including, Voice, All That, American Dad, Star, America’s Best Dance Crew, and many others. Also, she has made associations with some of the most famous music artists including, Janet Jackson, Timbaland, Jay-Z, Pharrell Williams, and Fall Out Boys. Furthermore, her collaboration with Nicole Wray for All n My Grill is widely acclaimed.

And there is a long list of her professional practices. She also has been featured in many music videos and artist singles. Furthermore, she has created the soundtrack for Step Up 2: The Streets. In 2015, she performed with Katy Perry. In addition, she has performed alongside Madonna, Kelly Clarkson, Skrillex, Monica, and more others.

Missy is not only active an artist, but she is constantly found in the events regarding women’s rights and animal rights.

There is a long list of awards and honors under Missy’s name.

In 2019, she won the Michael Jackson Video Vanguard Award.

Missy Elliott is also the best-selling female rap artist. In addition, her debut album was able to be on top 3 on Billboard 200 list. Also, the song Lady Marmalade which she produced was able to be number one on the Billboard Hot 100 in 2001.

Also recently, a man in Virginia collected over 30,000 signatures in support of a statue to honor Elliott’s outstanding career to be erected in her hometown.

As of 2022, Missy Elliott has a net worth of about $50 million. Also, she owns some expensive cars including Ferrari, Phantom, and Lamborghini.

Missy owns a mansion in Virginia Beach and has more than 2,000 pairs of sneakers.

Currently, there is a rumor about the release of her new album and the world tour after that. But none of the reliable sources have confirmed that yet. However, her recent demand for a dancer has led us to believe that her tour is very near.

In 2013, rumors were that Elliott was married to Sharaya J. However, both of them denied the rumors.

Rumors were that Missy’s sexual orientation is gay.

Missy Elliott is 5 feet and 2 inches tall and weighs 60 Kg. Furthermore, she has brown hair and black eyes. And, her shoe size is 7.5 US.

Missy Elliott is active on social media and also has her own website.