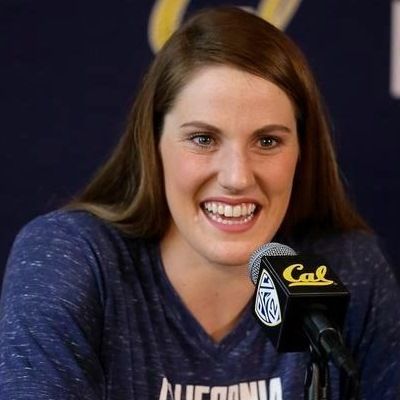 A huge part of swimming for me is I love it, and it is so much fun.

I'm just an all-around happy girl who loves everything about her life.

I'm always so excited about what I do that I try to get everyone to feel that way.

I don't think about the trials and the Olympics a lot. If I do, it's just going to stress me out and get me worried.

For right now, I still believe that college is what's going to make me the happiest girl.

What is the relationship of Missy Franklin?

Missy Franklin in 2012, was in a relationship with fellow swimmer John Martens, the couple broke up later. In 2013, Missy was reportedly dating Daniel Butler.

Currently, she is engaged with another swimmer. His name is Hayes Johnson. She announced this news via an Instagram post.

Who is Missy Franklin?

Missy Franklin is an American former swimmer. She is best known for winning five ‘Olympic’ gold medals. The multiple-record holder was only 17 when she won five gold medals, acing both the 100-meter and 200-meter backstroke events at the 2012 ‘Summer Olympics.’

In Dec 2018, she announced her retirement.

Missy was born in Pasadena, California, the United States on May 10, 1995. Her birth name is Melissa Jeanette Franklin and she is currently 25 years old.

There is no information about her siblings. Missy holds American- Canadian citizenship, but her ethnicity is unknown. Her birth sign is Taurus.

She began training with the ‘California Golden Bears’ in the 2013–14 academic year.

Talking about her profession, Missy Franklin became part of the ‘Colorado Stars’ travel swim team at the age of 7 and soon discovered her passion for swimming. At the age of 13, she competed at the 2008 ‘US Olympic Team Trials’ but could not qualify for the ‘Olympics.’

She won her career’s first international medal in the 200-meter backstroke event at the 2010 ‘FINA Short-Course World Championships’ in Dubai.  She won three individual ‘NCAA’ titles at the 2015 ‘NCAA Swimming and Diving Championship.’

In the year 2011, she won five medals at the ‘World Aquatics Championships’ in Shanghai. The tally included three gold medals, one silver medal, and one bronze medal. She broke her own national record by clocking 2:05.10 in the final of the 200-meter backstroke event. This was also Franklin’s first individual world title.

Whereas, three days after her event in Shanghai, Franklin competed at the 2011 ‘National Championships’ in California. She stood fourth in the 200-meter individual medley and twelfth in the 50-meter freestyle event.

Besides that, Franklin became the first woman to qualify for seven ‘Olympic’ events. She made it to second place in the 200-meter freestyle event. Franklin competed at the 2012 ‘London Olympics’ at the age of 17. She won a bronze medal on the first day of her competition, in the 4×100-meter freestyle relay.

Franklin competed at the 2013 ‘Aquatics World Championships’ in Barcelona after securing the first place in the 100-meter and 200-meter freestyle and backstroke events at the ‘US National Championships.’

However, she lost the ‘Swimmer of the Meet’ title to Katie Ledecky, who had won four gold medals in the competition and had broken two records.  At the 2015 ‘FINA World Cup,’ Franklin competed in four events and won two bronze medals and two silver medals.

She has an estimated net worth of around $3 million (as per 2022 data) and she has earned that sum of money from her professional career.

There are no drastic rumors regarding Missy’s personal and professional life. It seems like she is doing the best job without harming others for which she hasn’t been a part of controversy yet.

Missy Franklin has a height of 6 feet 2 inches. Additionally, she weighs is 75Kg. Her hair color is brown and her eye color is dark brown.