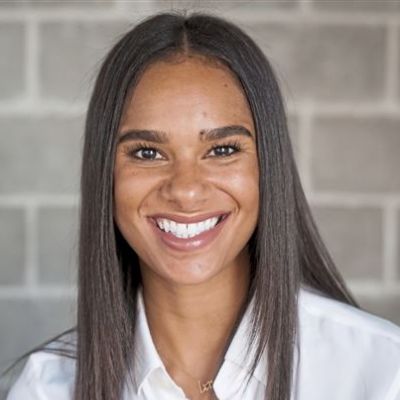 Who is Misty Copeland's Husband?

Misty Copeland is happily married to her husband, Olu Evans. He is an American attorney.

After 10 years of dating, the duo took their relationship forward with marriage on July 31, 2016. They wedded at the Montage Hotel in Laguna Beach with a view of the ocean. Their wedding was attended by around 100 guests including their near ones and family members.

Recently in July 2022, she shared that, she has become a mother to a child, a son with her husband, Olu. They named their son, Jackson who was born in April 2022.

She even said she want to keep her baby boy out of the limelight.

Who has she dated before getting married to Olu?

There is no info on her past affairs or hookups.

Who is Misty Copeland?

Misty Copeland is a popular American ballet dancer. She performs as a dancer for the American Ballet Theatre (ABT), a New York-based company.

In July 2022, during an interview with People, Misty disclosed that she has become parents to a now-month-old baby named, Jackson with her husband, Olu Evans.

The famed ballet dancer was born on September 10, 1982, in Kansas City, Missouri, the United States. As of 2022, she is 39 years old holding an American nationality.

She was born to her father, Doug Copeland, and mother, Sylvia DelaCerna. Her father belongs of German and African American descent whereas her mother is of African and Italian ancestry.

Through her mother’s second marriage, she is the youngest child among her four siblings. Similarly, she has other two half-siblings.

In the beginning, she studied at the Lauridsen Ballet Center. Then, she enrolled at the San Francisco Ballet School and American Ballet Theatre’s Summer Intensive on a full scholarship.

Then, In 2000, she became ABT’s National Coca-Cola Scholar.

Copeland became a member of American Ballet Theatre’s Summer Intensive program on a full scholarship. In 200 she danced for the character of Kitri in ‘Don Quixote.’
Unfortunately, Misty went through a lumbar stress fracture in mid-2001. She was given birth control pills, by her doctor. Due to the pills, she gained 10 pounds.

So, she went through depression and had an eating disorder. Later, she successfully gained her confidence back and won over the depression.

In May 2013 she made comeback on the stage and made performances as the Queen of the Dryades in’Don Quixote.’
She became the first African-American woman to be taken as the principal ballerina in ABT’s 75-year history on June 30, 2015.

According to Celebrity Net Worth, Misty Copeland has a net worth of around  $500 thousand dollars. Her salary and income have not been disclosed yet.

The beautiful ballet dancer has not been part of any serious rumors and controversies as she is able to maintain a clean profile.

Moving on to her physical appearance, She has a brown complexion along with a pair of brown eyes and black hair.

Similarly, there is a Facebook page under her name, that has garnered 625K followers.