Misty Lee is an American voice actress and comedian. She is married to Paul Dini.

Misty Lee is a married woman. She has married an animation producer and comic book author. His name is Paul Dini.

Their wedding ceremony was held on 30 Oct 2005. They currently live in Los Angeles. 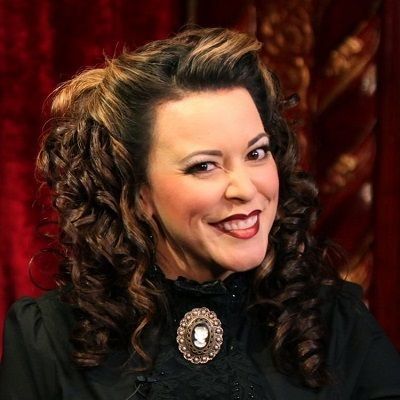 Every role, no matter how light or dark it is, is rooted in personal experience. If it isn’t personal, it’s not real – and if it isn’t real to YOU, the audience smells it right away

I wanted magic to be more than just sparkles, skin, and pointing at things

I collect skulls, and own bloodletting fleams. I do magic with human fingerbones.

Who is Misty Lee?

Misty Lee is an American voice actress and comedian. She is also a professional magician and holds the position of a staff Seance Medium.

She was born as Misty Lee Stankiewicz on April 22, 1976, in Mount Clemens, Michigan, USA. Her ethnicity is Caucasian.

She has not given information about her parents and siblings. However, her mother was a victim of verbal abuse.

Misty’s academic information is not disclosed. However, she has done training in dental and oral medicine.

Moreover, she once worked at Michigan State University as a theatrical sign interpreter.

Misty Lee as an actor has appeared in several stage and theater performances. She has also performed songs and sleight of hand.

As a magician, Misty regularly performs at Hollywood’s Magic Castle. It is located in Hollywood, LA, and is a nightclub for magicians and magic lovers.

Misty is doing great professionally and personally. She has not been in any huge rumors and controversies.

As of 2022, this magician plus actress has an estimated net worth of $500 thousand.

As per the sources, the average salary which magician receives around $49,000 per year

Misty Lee has dark brown eyes and black hair. Her height and weight are of average size.

Misty has 6.85k followers on Twitter which she joined in Dec 2008. She is also active on Facebook since Sep 2011 and has around 8.9k followers.