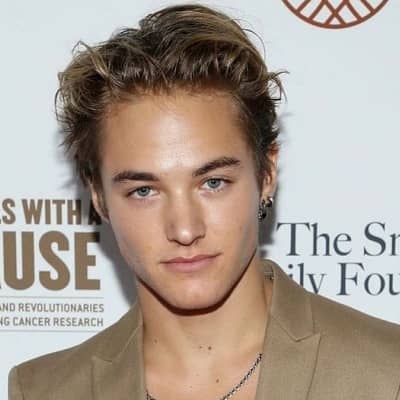 Mitchell Hoog currently appears to be Single. To date, he has never introduced anyone as his girlfriend or lover. It seems he is more focused on his career rather than being in a romantic relationship. In further days if he shared anything about his love life then we will update it.

Who is Mitchell Hoog?

Mitchell Hoog is an American young movie actor and model. He rose to fame after starring in the 2019 Netflix original drama film Walk. Ride. Rodeo where he portrayed the role of JC Snyder.

He is starring in the upcoming supernatural horror film, ‘The Conjuring 3′ as Young Ed which is planning to release on June 4, 2021.

The actor was born in Fort Collins, Colorado on the 20th March 1999. He is 22 years old as of 2021 and his Sun sign is Pisces. Mitchell hasn’t yet disclosed his parent’s and sibling’s details in the media.

Talking about his nationality, she is of American nationality and belongs to mixed descent of Norwegian, English, Irish, German, French-Canadian, and Swedish.

His academics details are under the curtain at the moment. To pursue his acting career he joined acting schools such as AEC Studios at Colorado, Spotlight at Atlanta, Berg Studio at Los Angeles, Diana Castel in Los Angeles.

He signed to the Ford Models and Donna Baldwin modeling Agency where he worked with various prestigious brands such as Ralph Lauren and Helmut Lang. Similarly, he has appeared in numerous magazines such as Vman magazine, Yearbook magazine, Fantastic magazine, and more.

In 2019, he made his acting debut through the Netflix film, Walk. Ride. Rodeo where he was cast in the role of JC Snyder alongside Spencer Locke. That year, he also appeared in the 2019 drama-biopic film, Harriet opposite Cynthia Erivo.

Then, he was a part of the opening scenes of the horror-comedy film, Freaky in the year 2020. In 2020, he was cast as Mac Morris, the son of Mark-Paul Gosselaar’s character in the film, Saved by the Bell. Furthermore, his other notable film projects are Daybreak (2019), Sleeping With My Student (2019), The Wrong Stepmother (2013). His upcoming film, The Conjuring 3 features popular personalities like Patrick Wilson, Sterling Jerins, Joey King, Steve Coulter, and more.

Hoog has a fresh career so as of now he hasn’t involved in any sorts of rumors and disputes that create a huge buzz in the media. Also, he stays miles away from such controversial acts that might hamper his uprising career.

Hogg has collected a fair amount of fortune through his profession as an actor. As per other online sources, he has an estimated net worth of around $ 5 million. His salary and other assets are still under review.

The actor stands at the height of 5 feet 11 inches tall whereas his weight is around 65 kg. Similarly, his waist, Chest, and biceps sizes are 30, 39, and 10 inches. She has bleached hair color with hazel blue pair of eyes.