Is Mizkif Single or Dating?

Mizkif is currently single and is not dating anyone.

Though, talking about his past relationships, he was romantically linked with, Maya Higa, a fellow Twitch streamer and wildlife rehabilitator from 2019 to 2021.

They started seeing each other in the summer of 2019 and publicly confirmed their relationship in August 2019 through a YouTube video.

But later in September 2021, Mizkif publicized their separation on Twitter. 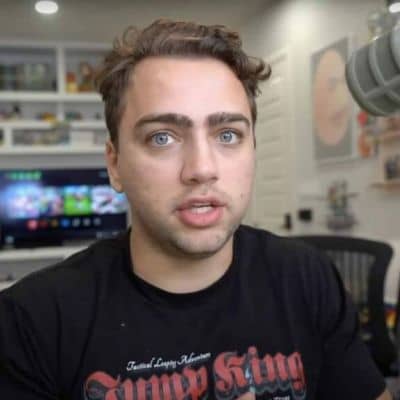 Mizkif is a popular American Twitch streamer and gamer. Mizkif has played Minecraft, Mario Party, Pokemon, and so on. He is the co-founder of a gaming organization named, ‘One True King.’

Mizkif was born in the United States on February 14, 1995. Mizkif is 27 years old as of 2022 and holds an American nationality. He maintains Caucasian ethnicity. According to the astrological chart, Aquarius is his birth zodiac sign.

He was born Matthew Rinaudo to his anonymous parents. He has a sister named, Emily Rinaudo while the name of his elder brother is unknown yet.

Moreover, Mizkif is a high school graduate and while planning to join University to continue his study further he was diagnosed with heart disease. After recovery, he withdrew his plan of continuing the study furthermore and began to create content for his Youtube channel.

In 2016, Mizkif started streaming and he streamed to a small community until 2018. In 2018, he got popular for working as a cameraman for, Ice Poseidon, a fellow streamer.

In May 2019, along with fellow streamer Esfand, he was banned from Twitch for making unsuitable comments towards a female streamer at PAX East. In the same year, he organized a charity stream for the St. David’s Children’s Hospital in Austin, Texas. The organization was able to raise more than 5K USD which he intended to use for purchasing toys for the patients of the hospital.

During a sleeping stream. he made more than 5.6K USD which gained him high fame in March 2020. He became the third most-viewed Twitch Streamer at the 2020 United States Presidential Election, along with fellow streamers, Trainwreckstv and Hasan Piker.

Along with fellow Twitch streamers Asmongold, Esfand, Tips Out, and Rich Campbell he officially announced the beginning and launch of their new gaming organization, ‘One True King’ on October 11, 2020.

Mizkif also worked as a host for the style show-‘Are You Smarter Than a 5th Grader? which ran on his Twitch channel under the title, ‘OTK Schooled’ from April to June 2021. His channel and the show reached their peak viewership at 192, 000 concurrent viewers and with about 20K other viewers among the invited guests’ streams.

Along with fellow streamer Ryan “Simply” Reeves, Mizkif rappelled down, 600 Congress, a 32-story building for the ‘Make-A-Wish’ fundraised event with the title, ‘Over the Edge’ in June 2021. All total they were able to raise more than 20K USD during their companion charity stream.

According to the Celebrity Net Worth, the net worth of Mizkif is estimated to be around 900K USD. Being an emerging star, he is on the way to amassing more wealth.

But, at the moment his salary and income are not known.

Mizkif has not been involved in any serious rumors and controversies as of 2022. If any news or controversies relating to him are found, it will be updated further.

Mizkif is 5 feet 9 inches tall and weighs around 72 kg. Additionally, his body dimensions are 41-32-38 which means his chest size is 41 inches, waist size is 32 inches and hips size is 38 inches.

Talking about his facial appearance, he has a couple of hazel eyes and brown hair.

He also has a self-titled youtube channel, which has garnered around 743 K followers. Likewise, he is also active on Tiktok having about 1.1 million followers.