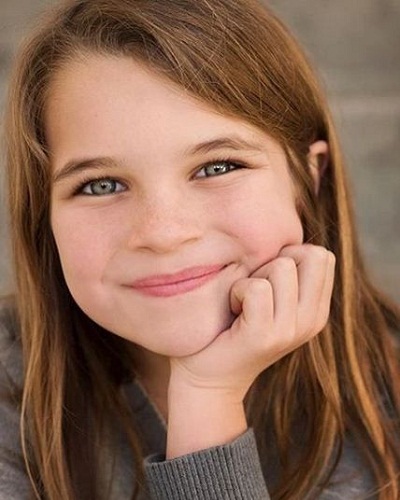 This American Actress was born in Los Angeles, California, United States and at present, she lives there. Standing 4 feet 2 inches tall, Raegan Revord has kept her personal information behind the limelight.

Her birth sign is Capricorn. We hope she shares his personal information very soon!!

She landed her role in an American sitcom titled Modern Family. There were 210 (list of episodes) with 9 seasons in total. Raegan worked there from 2014 to 2016 as Megan.

Her role as Megan gave her a path for her acting career. When she received the role of Modern Family, she was at the young age of 6.

In 2016, Raegan came up with another American web television series named Grace and Frankie which was a guest star. This Netflix production had 52 (a list of episodes) where Raegan played the role of Little Girl.

As Melinda, she landed her role in another American sitcom-Teachers. Its first episode was aired on January 13, 2016. Likewise, her other amazing appearance was visualized in Young Sheldon. In this American television series, she performed the role of Missy Cooper i.e. a co-lead role.

Her role in The Big Bang Theory (an American sitcom) also falls under one of her best appearances.

You may like to read An American child actor and voice artist- Caleel Harris has active filmography at the young age of fifteen!

Raegan’s debut film was a Short film where she acted as Ballerina. The movie titled Tortoise is a short film/Comedy based movie released back in 2015. The same year, she landed her role in Jia which was again a Short film. She portrayed the role of Anna in the movie.

In 2017, she made her comeback with Drama/short film-based movie named I See You as Amy. The same year, she landed her role in Wish Upon which is Fantasy/Thriller based movie. The movie was able to earn 23.5 million USD at the box office with only budget of 12 million USD.

She landed her acting as Zoe Ackert in Mitch Davis’s movie titled Mitch Davis. This 1 hour 32 minutes long movie was able to earn 1.6 million USD at the box office.

She is also involved in charity work. Therefore, Raegan is a Junior Ambassador for Children’s Hospital Los Angeles.

Raegan is a child actress, and her net worth is estimated to be around $ 300,000(US). As she is just 11 years old, at present, she is too young to be in any relationship. But when she grows, we hope she finds someone special very fast!!