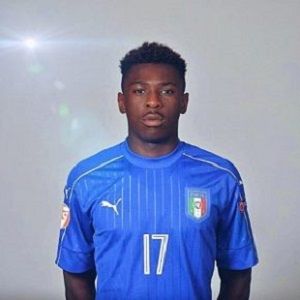 Who is Moise Kean?

He is the first player born in the 2000s to make an appearance in Italy’s Serie A and the UEFA Champions League.

Moise Kean was born on 28 February 2000, in Vercelli, Italy. His nationality is Ivorian plus Italian and he is of African ethnicity.

His parents are Ivoirians. His mother’s name is Isabelle Dehe and his father’s name is Biorou Jean Kean. He was interested in football since his childhood age and he wanted to become a professional football player since he was a young child.

Information on his educational background is unknown.

Kean began his club level football career at the leading junior Italian club, Asti in 2007. After playing a season with Asti, he was signed by the Torino Football Club. He played for the team until 2001. He left Torino in 2010 when he was signed by the Italian professional team Juventus FC.

He made his professional debut for Juventus on 19 November 2016, at the age of 16 in a 3–0 win over Pescara in Serie A. He became the first player born in the 2000s to compete in one of Europe’s four major leagues including Serie A and the UEFA Champions League.

Since 2015, Kean has represented Italy at under-15 and under-17 levels. With the Italy U17 team, he took part at the 2016 UEFA European Under-17 Championship and scored a goal in the tournament. The right-footed center forward wears jersey number 34 in Juventus.

Moise Kean is playing for his country as a forward. The Euro cup matches will take place in different countries which are listed below:

Moise Kean: Salary and Net Worth

He has a salary of 3 Million Euro (2.7 Million Pound) per year and his estimated net worth is 17 Million Euro.

Rumors were that Moise will be leaving the club this season. Manchester City and Arsenal are reported to be keeping an eye on Kean for the next season, but agent Mino Raiola has confirmed that he will be staying at Juventus.

Moise Kean has a height of 6 feet. His body weight of 72 kg. His hair color and eyes are black.