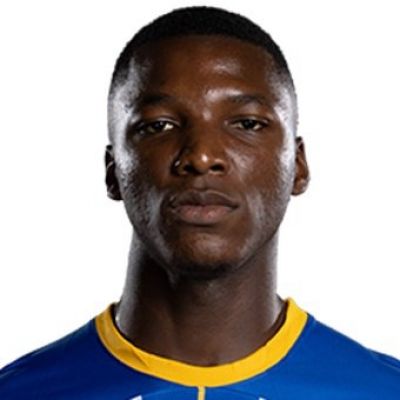 Is Football Player, Moisés Caicedo Single Or Dating Someone?

The 21-years-old Ecuadorian player is currently dating his beautiful girlfriend, Paolita Salazar. Though the couple has not shared other info about their relationship, they seem to be madly in love with each other.

Also, the couple is not married yet.

There is no further info on the player’s past relationship and affairs.

Who is Moisés Caicedo?

Moisés Caicedo aka Moisés Isaac Caicedo Corozo is a professional Ecuadorian footballer. Currently, he plays as a midfielder for The Ecuador national team and Premiere League club, Brighton & Hove Albion.

Being part of Ecuador’s national team, he is an active player in the FIFA world cup 2022.
In the opening game against the host country Qatar, Ecuador won by 2 goals which were scored by the captain of Ecuador’s team, Enner Valencia. The first game was held at the Al Bayt Stadium, Qatar Sunday, 20 November 2022.

Moisés was born on November 2, 2001 in Santo Domingo, Ecuador. As of 2022, he is 21 years old and holds Ecuadorian nationality.

His astronomical sign is Scorpio and he belongs of Afro-Ecuadorian descent.

However, he has not shared authentic info about his parents, siblings, and early educational life.

As per the sources, he is believed to be a high school graduate, but his educational life is still under review.

In 2019, he joined the Independiente del Valle senior level after starting his youth football career with them.

Following that he signed a half-year deal with the English club, Brighton & Hove Albion on 1 February 2021. But the deal amount he was paid is unknown.

Later, he signed with club Beerschot on a season-long loan. But he returned back in the Albion and made a goal against Manchester United during the game held on 7 May 2021.

In 2020, he was named to the Ecuador senior team for playing in the 2022 FIFA World Cup, against Argentina.

Making an opening goal 4-2, defeat against Uruguay,  he became the first player to ever score in CONMEBOL World Cup qualifying.

On November 20, 2022, Ecuador has become able to take it furthermore with one step by defeating hosts Qatar at the Al Bayt Stadium in the opening game.

According to various sources, his market value is believed to be between, €11M to €18M.

Ecuadorian Midfielder Caicedo has not faced any serious rumors or controversies. Regardless, fans are excited to see his performance in the ongoing 2020 FIFA World Cup.

Moisés Caicedo stands at a height of 5 feet 10 inches, while he weighs around 73 kg. Adding more, his physical appearance includes a pair of black eyes and hair in a dark complexion.

The 2022 FIFA World Cup Ecuadorian player, seems to be active on social media platforms. his Instagram account, @moises_caicedo55, is enriched with over 293k followers.

Furthermore, there is also a Fan based Facebook page under his name that has garnered more than 10k followers and likes.