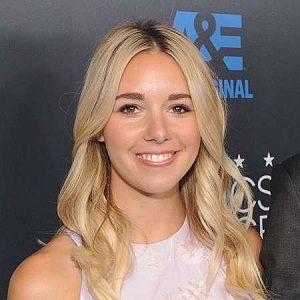 Mollie Gates is a married woman. Gates had an affair with Thomas Middleditch since 2012. Thomas is a Canadian actor. After living together for 3 long years together, they got engaged in June 2015 and celebrated their wedding on August 22, 2015, in Middleditch’s hometown.

The couple has not welcomed any children yet. However, in late May 2020, this couple started living separately.

Who is Mollie Gates?

Mollie Gates is a costume designer and working in Hollywood. She has starred in more than ten movies so far. She is the wife of the television writer, comedian, and famous actor, Thomas Middleditch.

Gates’ family information is not available through any sources.

Gates was raised in Los Angeles. She is American and speaks English. From an early age, she was interested in the field of fashion and wanted to work in her interesting field.

Gates’s complete education history is still under review. She graduated from her high school from Louisiana State University(LSU) and received a degree in apparel design.

Mollie Gates worked as an internship for the Paper Magazine clothing line while still studying in LSU and later for New York-based celebrity stylist.

She found out that she wanted to work in movies when she starred in the movie ‘Sex and the City 2’ and got her first taste of business. Gates has worked in the movie ‘The Twilight Saga: Breaking Dawn 1 and 2‘ in 2011 and 2012 and also worked in ‘Django Unchained’ in 2012 as a costume designer.

Moreover, ‘Parker’, ‘Flying Monkeys’, and the TV series ‘Treme‘ were some of the movies and shows that Gates worked as a wardrobe assistant. The movie ‘Parker‘ was released in 2013 and got a huge success. Then she was finally hired for the Oscar-winning ‘Dallas Buyers Club’.

She worked in the movies ‘The Bagman’, ‘The Loft’, ‘Left Behind’, ‘The Bronze’, ‘Search Party’, and in the television series ‘Silicon Valley‘ and others in 2014 and 2015.  Her works were appreciated as she worked on every crucial detail of the characters.

Gates had a very successful career. She received fame after working as a cloth designer and wardrobe assistant for the famous hit movies like ‘The Twilight Saga: Breaking Dawn 1 and 2’. Though, she has not received any awards up till now.

Salary and net worth

Mollie’s works are widely appreciated more than her stunning looks. She is a successful costume designer and has maintained her fame as well.

However, the salary that Gate earns is not known and her net worth is also still under review.

Gate thinks that fashion has helped develop woman empowerment. The news was spread stating that Gates was getting engaged with her longtime beau, which later turned out to be true. Gates is free from any kind of controversies.

Mollie Gates has blonde-brown hair and her eye color is light brown. Her height and weight are in average size.

She has a very good personality and stunning looks.