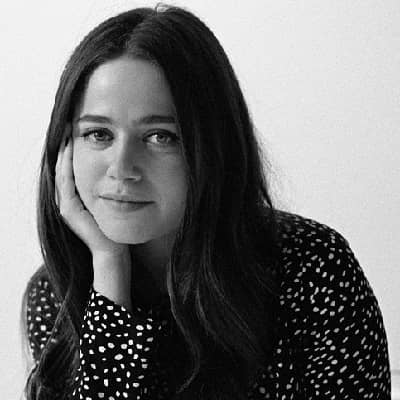 Molly Gordon is in a blissful love relationship with her boyfriend Nick Lieberman. It has been a long time since the couple has dated each other.

Professionally, Nick is a well-named director, editor, and actor as well.

The duo seems inseparable as their chemistry looks perfect on social media and in real life as well.

Who is Molly Gordon?

Molly June Gordon, popularly known as Molly Gordon is a well-recognized American actress. Gordon is widely famed for her appearance in the drama TV series Animal Kingdom(2016-18) portraying the role of Nicky.

Also, she is recognized for her role in the comedy movies Life of the Party(2018) as Triple A, and Good Boys(2019) as Hannah.

Molly Gordon was born on 6 December 1995. At present, her age is 25 years old. Likewise, her birthplace is Los Angeles, California, the USA.

Talking about her nationality, Molly holds an American identity whereas her ethnicity is Lithuanian Jewish.

Regarding education, Molly joined New York University but quit her study due to dissatisfaction with her program. Moreover, during her high school days, Gordon portrayed Dot during the performance of Sunday in the Park with George at the age of 17.

Molly is the childhood friend of a well-reputed actor, Ben Patt. At the young age of four, they starred in productions of Fiddler on the Roof and How to Succeed in Business Without Really Trying when she was just five.

Well-renowned actress, Molly Gordon stepped into the acting career emerging in I am Sam in the year 2001. Likewise, she again emerged in the movie Bewitched in the year 2005 performing the role of a trick-or-treater.

Her real acting career started in the year 2015. A year before that, she shifted to New York City to pursue her career as an actress. Molly made her professional debut by starring in Ithaca and Sin City Saints. Moreover, she also performed in the Christmas comedy-drama movie Love the Coopers opposite John Goodman, Ed Helms, Diane Keaton, and Anthony Mackie.

Furthermore, she emerged as a guest actress in episodes of Orange Is the New Black and San City Saints. Gordon’s main successful performance after playing in the role of Nicky in the TNT pilot Animal Kingdom which is based on the 2010 Australian film of the same name.

Likewise, she starred in Life of the Party in the year 2018 with other stars like Melissa McCarthy, Matt Walsh, and so on. She also started to learn to perform the role of Alice Spencer in the Off-Broadway production of Alice by Heart in December 2018.

Beautiful actress, Molly Gordon has earned a decent income from her profession in the acting industry. She has been active in her profession from 2001 till now.

Molly has never been part of any controversial matter or rumors till now.

It seems that the actress prefers enjoying her personal life and does not want to merge it with her professional life.

25 years old gorgeous star, Molly Gordon has charming looks as well as an admirable personality. She stands at a height of 5 feet 4 inches. Also, she has a balanced bodyweight of 55 kg.

Furthermore, Molly has brown eyes whereas her hair is brown.

About her social media presence, Molly Gordon is an active personality on social media. Molly has more than 136k followers on her official Instagram account @mollsterg.

She is also active on Twitter with around 9k followers.

Nevertheless, Gordon is not available on Facebook till now.