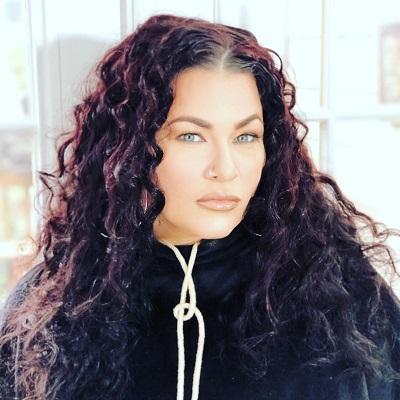 Molly Hopkins is currently in a relationship with a mystery man.

She has not shared any details about the mystery man. However, she disclosed that she has been talking with a new man and making most while remaining isolated.

Before this, Molly was married to her ex-boyfriend, Luis Mendez. They first met when Molly headed to Dominican for a trip. It was love in the first slight.

Later, the couple appeared in the TLC’s Reality TV show, 90-day fiance, and got married on the 20th of June 2017. However, they parted their ways with a nasty divorce in 2018.

Six months after the divorce, Luis got remarried.

Molly has two daughters with the name Kensley and Olivia from her previous relationship which is still a mystery.

Who is Molly Hopkins?

American Molly Hopkins is a Reality TV Personality and businessman. She is renowned for the reality TV series, Double Divas.

Last, in 2017, she appeared in the series, 90-day fiance. She is also the co-owner and the CEO of the clothing line, Livi Rae Lingerie.

Molly Hopkins was born on the 11th of July 1975 in Canton, Georgia. She is of British-Irish-Welsh ethnicity.

Till the date, she has not shared any details about her father and mother.

She has a brother, Jess Hopkins, and a sister, Katie Jo Hopkins. Jess is a musician by profession. Last, he appeared in the spin-off show of 90-day fiance.

Talking about the educational background, she completed her High School education from Sequoyah High School in her hometown. Later, she got enrolled at Reinhardt University to study music.

Molly Hopkins started her career as a businesswoman with her clothing line business, Livi Rae Lingerie.

However, she first came in the limelight with the TV series, Double Divas along with her partner, Cynthia Richards back in 2013. The show was based on the day-to-day activities that took place in the clothing firm. The show completed two seasons with 35 episodes altogether.

Later, in 2017, she appeared in the TLC’s TV series, 90-day fiance where she met her Dominican fiance, Luis Mendez.

As of 2020, she has made an estimated net worth of $1.5 million. As the CEO of Livi Rae Lingerie, her earnings are in the range of $74k – $402k. Besides that, she also makes through the profit of the company too.

Also, she makes through her TV appearances too.

Being a TV personality, her personal life is constantly under the public eyes. Last, she made headlines when she parted her way with her husband, Luis Mendez with a nasty divorce.

After the divorce, the former couple ended up in the war of the words as Molly claimed that Luis used her and her finances.

In response to the statement, Luis fired back making statements that Molly has used him for fame and publicity of her business.

Molly Hopkins is a hazel-eyed brunette. She has a decent height and weight. However, details about her body measurements are not available.

All about the gay marriage of Kenneth Niedermeier and Armando Rubio!

Wining the fight against Haters; who wanted to take down the Ads with disabled and plus-size models!! Beginning of the Truth…