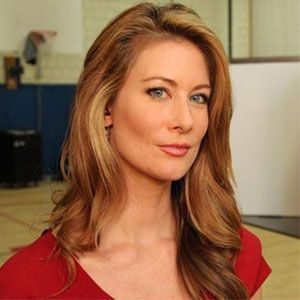 The engagement ceremony was performed on 9 June 2011.

Both the husband and wife from their relationship welcomed a beautiful daughter in Aug 2016. They named her Marin Petrus.

They are enjoying their company together and living soundly. There are no rumors about her external affairs.

Who is Molly Line?

She has made appearances on popular shows such as The O’Reilly Factor, America Live, The Five, Fox & Friends and much more.

She was born on January 31, 1977, in West Virginia, United States. She grew up in Hambleton, New Jersey and holds Caucasian ethnicity.

She enjoyed her childhood days in her hometown. Furthermore, there are not many details regarding her father and mother but has a brother.

Talking about her education, she has cleared her school from Tucker County High School, Hambleton, West Virginia. Later she joined Virginia Tech and completed her graduation in Bachelor of Arts in Mass Communication and Political Science.

During her college life, she has also participated in Miss West Virginia in 1997 and 2000. However, she couldn’t win though.

Molly Line began her career in the news as a photographer and reporter for WDTV in Bridgeport, West Virginia in 1999-2000. Soon after leaving WDTV in 2000 she moved to Albany, New York to work as an anchor/reporter for WXXA. Molly continued it from the year 2000-2002.

In addition, she gained popularity from WFXT (Channel 25) 2002-2005 where she worked as an anchor/reporter. She has covered the sentencing of the shoe bomber Richard Reid.

Later, Molly was invited to join Fox News Channel as a Boston-based correspondent. She is still running shows for more than a decade on the news channel.

Her great works include the news of Boston Bomb Threat in 2007 to one of the most dangerous shoots out of U.S. history in December 2012, she covered every story beautifully and bravely. She has hosted several hit shows in her career at Fox News Channel such as The O’Reilly Factor, Huckabee, Happening Now, America Live, The Five, Fox Report, and Fox & Friends.

Despite being an amazing news personality, she still doesn’t win any awards. Although, her works have been always appreciated and recognized.

This news presenter’s estimated net worth is $2 million.

As per the sources, a broadcaster receives an average salary of around $49k per year.

Molly hasn’t been in any controversy or rumors regarding her professional and personal life.

Molly Line has a stunning figure with a height of 5 ft 8 inches and her weight is 60kg. Her body measurement is 36-26-37 inches.

She has golden-brown hair and a blue eye with a bra size of 34B.

Being a media personality Molly is active in social media sites.