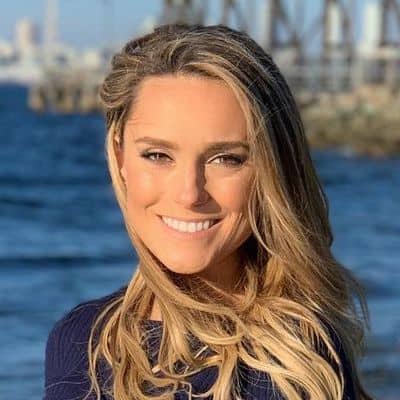 Molly McGrath is currently married to a real estate investor. Her husband’s name is Max Dorsch and they exchanged rings in June 2017.

Their wedding was held at Squaw Valley, California on 30 June 2018.

In Sep 2020, she announced her pregnancy. Then in Jan 2021, she welcomed their first child, Raymond Michael Dorsch V. She showed her fans the child via a social media post.

Molly also had a boyfriend before marrying Max. She started dating Alec Martinez in 2014. But their affair only lasted for a year and they broke up in 2015.

Who is Molly McGrath?

Molly McGrath is an American sportscaster. She is known for her reporting style on ESPN for college football and basketball games.

In addition, she is also popular on social networking sites.

She was born on 06 June 1989 in San Francisco, California, U.S. The name of her father and her mother’s name is Michael McGrath and Deborah McGrath.

Molly’s ancestry is Irish-Mexican-Spanish and has an older brother Patrick.

Talking about her academics, she has attended St. Ignatius College Preparatory. She also enrolled at Boston College and got a BA degree in Communication/Broadcast Journalism.

Molly McGrath at present is an employee of ESPN. She joined the network in June 2016 as a Sideline reporter and host.

Before this, she was associated with FOX Sports 1 as Sports Anchor/Reporter from May 2013 till June 2016. She was also a host at Comcast SportsNet from Jan 2012 till May 2013.

Her other worked organizations were Boston Celtics as Web Reporter.

At present, her estimated net worth is around $1 million US. Also, her salary from her career is around $85,000 per year.

Some of the top broadcaster’s financial worth is,

This sports star is keeping herself away from rumors and scandals at present.

Regarding Molly McGrath’s body features, her height is 5 ft 5 inches and her body weight is 56 kg. Moreover, her eyes are hazel and her hair is blonde.

Molly is officially active on social networking sites. She has more than 150k followers on Twitter and over 26k followers on Facebook.