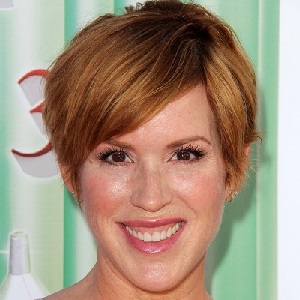 In life, there is always that special person who shapes who you are, who helps to determine the person you become

I don't really believe in regret. I think you can always learn from the past, but I wouldn't want a different life

I like to say, jazz music is kind of like my musical equivalent of comfort food. You know, it's always where I go back to when I just want to feel sort of grounded.

Molly Ringwald has been married twice in her life. Her first husband was Valery Lameignère, a writer. They got married on 28 July 1999 and divorced in 2002. After that, she got married for the second time in 2007, with writer Panio Gianopoulos.

The couple has three children together named Mathilda Ereni Gianopoulos, Roman Stylianos Gianopoulos, and Adele Georgiana Gianopoulos. They have been married for a decade now and their relationship is going very well. In the mid-1980s, she dated actor Anthony Michael Hall and American guitarist Dweezil Zappa. From 1987 to 1988, she was in a relationship with musician Adam Horovitz.

Who is Molly Ringwald?

Ringwald was born on 18 February 1968, in Roseville, California, USA. Her full name is Molly Kathleen Ringwald. She is the daughter of Adele Edith and Robert Ringwald, a blind jazz pianist.

She has two siblings, Beth and Kelly, and an older brother who died before she was born. Her nationality is American and she is of German, English, and Swedish ethnicity.

Molly started her acting career at age five appearing in a stage production of Alice Through the Looking Glass as the Dormouse. The next year, she recorded “I Wanna Be Loved by You” with her father and her group, Fulton Street Jazz Band. When she was 10, she was chosen to play Kate in the West Coast production of Annie in Los Angeles.

From 1979 to 1980, she played the main role as Molly Parker in the series The Facts of Life. She also played the lead role as Frannie Goldsmith in The Stand (1994) and as Carrie Donovan in Townies (1996). She was nominated for Golden Globes and Young Artist Award for her album Tempest. In 2005, she won “MTV Movie Awards- Silver Bucket of Excellence Award” for her role in The Breakfast Club.

In 2008, she began playing Anne Juergens in the series The Secret Life of the American Teenager. She portrayed the role until 2013. In September 2014, Ringwald began writing an advice column for The Guardian. She recently appeared in Raising Expectations (2016), Doc McStuffins (2016), and Riverdale (2017). She has a net worth of 11 million dollars.