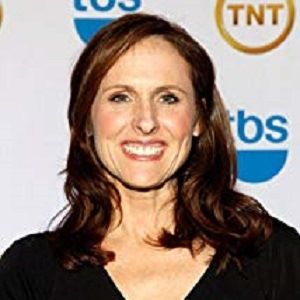 I feel great about it. I did six full years, and I loved it. I just felt like it was time. Not everything is going to be a perfect decision. Sometimes you hit, sometimes you miss, and that's the way it goes - about leaving Saturday Night Live (1975) to pursue a film career

My dad was a really fun guy and, despite his personal problems, he was a great father. It wasn't easy, but he did a good job of raising my sister Mary and I all by himself.

Molly Shannon is a married woman. She married Fritz Chestnut, an artist, in 2004 and the couple has two children namely Stella and Nolan.

Who is Molly Shannon?

Shannon was born in Shaker Heights, Ohio, the United States on September 16, 1964, age (54). She is the daughter of James F. Shannon and Peg Shannon, her father was a sales manager and her mother was a teacher. She has two siblings namely, Katie Shannon and Mary Shannon Beatty.

She belongs to American nationality and Irish ethnicity. Her birth sign is Virgo.

On talking about her education, she attended St. Dominic School in Shaker Heights. Then, she attended Hawken School in Gates Mills, Ohio. Additionally, she also attended New York University, where she studied drama and graduated from NYU’s Tisch School of the Arts in 1987.

On talking about her profession, she went to New York but struggled to get any proper opportunities and landed a brief supporting role in the horror film remake of ‘The Phantom of the Opera’ in 1989.

Before her career really took off, she did cameos on television with ‘Twin Peaks (1991)’, ‘In Living Color (1993)’ and comedy sketches and spoofs with well-established comedians like Chris Rock and Jim Carrey. At ‘Saturday Night Live’ she also became popular for the characters she brought into the show like that of ‘Mary Katherine Gallagher’s weird, uptight Catholic school girl and then another senior showgirl ‘Sally O’Malley’.

During  1997, she also appeared on ‘Seinfeld’ titled ‘The Summer of George’ and also did a stint in singer Sheryl Crow’s video ‘A Change (Will Do You Good)’, along with a recurring role in ‘Will & Grace’. During  2006, she also managed to get a role in Sofia Coppola’s directed movie titled ‘Marie Antoinette’. In addition, she also played the role of ‘Aunt Victoire’ and worked along with stars like Kirsten Dunst, Jason Schwartzman, etc.

Year 2007 proved to be an experimental one for her as she moved from comedy to drama with ‘Year of the Dog’. Similarly, she also briefly starred on television with ABC’s ‘Pushing Daisies’ and in the movie ‘Evan Almighty’. Then, she managed to gain success with ‘Kath & Kim’ in 2008, an American remake of a popular Australian series, starring alongside Selma Blair.

In fact, she also returned to ‘Saturday Night Live’ for a special episode. In addition, her more recent entertainment projects include: the role of ‘Marge McDougall’ in the Broadway revival of ‘Promises (2010)’, a children’s book ‘Tilly the Trickster (2011)’, the spokesperson for as well as ‘Expedia.com (2012)’ and a recurring role in ‘Enlightened (2013)’.

She was nominated for Primetime Emmy Awards for Outstanding Guest Actress in a Comedy Series for Will & Grace (1998), Outstanding Guest Actress in a Comedy Series for Enlightened (2011), Outstanding Individual Performance in a Variety or Music Program for Saturday Night Live (1975). Likewise, she was nominated for Movies for Grownups Award for Best Supporting Actress for Other People (2016). Similarly, she was BTVA Feature Film Voice Acting Award for Best Vocal Ensemble in a Feature Film for Hotel Transylvania (2012), she was nominated for Blockbuster Entertainment Award for Favorite Supporting Actress – Comedy for How the Grinch Stole, Christmas (2000), Favorite Actress – Comedy for Superstar (1999).

There is no information regarding her income, salary. Whereas, her net worth was around $ 7 million.

Also, read the affair, salary, the net worth, controversy, and the bio of  Drena De Niro, Anne Meara