Molly Yeh is an American author as well as a cooking show TV host. Molly Yeh's relationship status at present is married

Molly Yeh’s relationship status at present is married. She exchanged vows with her long-term boyfriend Nick Hagen in 2014.

Her husband is a farmer who owns farms in Minnesota-North Dakota. This couple together has a child and will soon welcome their second one in Feb 2022.

In Nov 2018, she shared the news of her first pregnancy and in March 2019, their Bernadette Rosemary Yeh Hagen was born. 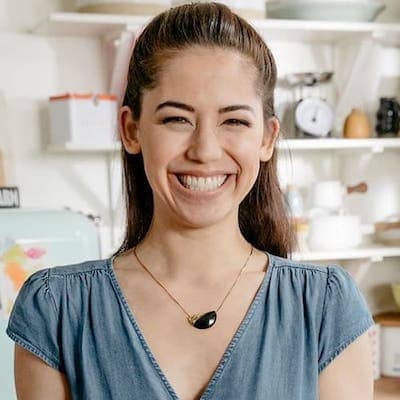 Who is Molly Yeh?

As of now, she has written two cookbooks.

Her birthdate is 22 May 1989 and she was born in Glenview, Illinois, the United States. The name of her mother is Jody plus her father is John Bruce Yeh (clarinetist).

Further, Molly’s ancestry is Asian-Jewish as her mom is Jewish while her dad is Chinese. She has two younger sisters named Mia (half-sister) and Jenna (chef).

As per her academics, she first went to Glenbrook South High School and then went to the Juilliard School. From the latter, she earned a bachelor’s degree in Music in 2011.

Molly Yeh is mostly recognized for hosting in the TV program Girl Meets Farm. The show was aired on the Food Network in June 2018 and its S9 was telecasted in Sep 2021.

In this, she shares her delicious and memorable foods with the audience. She has also hosted other projects named From the Top (podcast) and Ben and Jerry’s Clash of the Cones.

Moreover, Molly is an amazing writer who mostly writes cookbooks. Her first book was published by Rodale Books in 2016 titled Molly on the Range: Recipes and Stories from An Unlikely Life on a Farm. Then in 2018, her second publication Yoghurt was brought out by Short Stack Editions.

By the sources of 2022, she has collected around $500 thousand of net worth. But her annual salary and other earnings are behind the curtain.

As of now, this TV show’s host is not surrounded by any rumors or scandals.