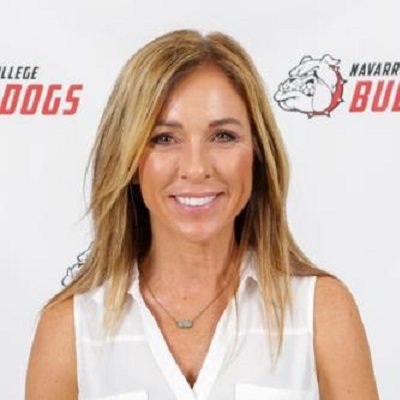 Monica Aldama is a married woman. Her husband’s name is Chris Aldama. The couple has been married together for more than two decades.

The couple is blessed together with two children that include a son, Austin and a daughter, Ally. Following the footstep of the mother, Ally is also a cheerleader.

Who is Monica Aldama?

American Monica Aldama is a cheerleading coach. Aldama is renowned for her appearance in Netflix’s series, Cheers.

Currently, she is serving as the coach for Navarro College.

Monica Aldama was born on the 9th of February 1970 in Texas, United States. She is of Spanish ancestry.

Till the date, she has not disclosed any information about her family.

She graduated from Corsicana High School in Corsicana, Texas. Later, she joined the University of Texas at Austin. From the University, she earned a bachelor’s degree in Finance.

Following that, she graduated from the University of Texas at Tyler with Honors in Business Administration.

while talking about her professional career, she is a successful cheerleading coach. Till the date, she has completed more than two decades in the field of cheerleading.

Since 2000, her cheerleading squad has won 14 National championships. Besides that, her team also holds the highest score that has been achieved until the day at the NCA College Nationals.

While talking about the documentary 2020- Cheers, she is the mentor of the cheerleading team for Navarro College.

It documents all the hardship that she and her team went through to win the national cheerleading competition that is going to held at Daytona Beach, Florida. Also, the series also reflects her idea of perfectionism.

Through her career as a cheerleading coach for over two decades, she has made a net worth of $700k.

Also, her average earnings as a documentary actress are $69k or above.

She is a brown-eyed brunette. Her height is 5 feet and 8 inches and weighs around 56 kg.

Aldama’s Respond in the Injuries

In the very little span of the time the Netflix series had a strong grip in the viewer’s mind. Many viewers of the series were mesmerized by the series.

However, some of the viewers had a great issue when it comes to injuries to the cheerleaders. Recently she has responded to that in an interview with CNN. She told that the shows telecast that they have fallen apart. However, the shown missed showing that thousands of times they were a success in performing the act.

Also, she added that they are performing in a very safe environment but cheerleading is a risky sport and they are taking the possible precautions as much as possible.

She also has a self-titled YouTube channel with 23.9k subscribers and 1.89 million views.