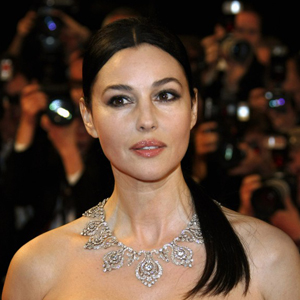 When I eat with my friends, it is a moment of real pleasure, when I really enjoy my life.

When a relationship doesn't work anymore, it's terrible to stay with someone that you don't love.

In a couple, sometimes, one or both people have to give up their personal life, dreams, and ambitions for the good of the family.

Monica Bellucci is a gorgeous lady focused on her work. Monica met and married her first love Claudio Carlos Basso on January 3, 1990. The couple was very happy initially but later they got divorced in 1994.

Monica met her second love on the set of the movie The Apartment, Vincent Cassel. After 3 years of dating and a successful relationship with Vincent, the couple married on August 3, 1999. They lived very happily and the couple got gave birth to their first child Deva in 2004 and second Leonie in 2010.

Unfortunately, in 2013 the couple announced their divorce. Currently, Monica is dating Telman Ismailov a businessman and entrepreneur of Mountain Jew origin.

Who is Monica Bellucci?

Monica Bellucci is an Italian actress and fashion model. She is famous for her role in the science-fiction film The Matrix Reloaded.

She was also famous for its sequel The Matrix Revolutions. Monica is also famous as a Bond Girl playing the role in the James Bond film Spectre in 2015.

Monica Bellucci was born on September 30, 1964, in Città di Castello, Umbria, Italy. Her nationality is Italian and her ethnicity is Agnostic. She is 56 years old.

Her birth name is Monica Anna Maria Bellucci. Her parents are Brunella Briganti(mother) and Pasquale Bellucci(father) and she is the only child in the family. Monica grew up in San Giustino. The gorgeous lady started modeling in her teenage which helped her to pay fees for her study.

After finishing her schooling she went to the University of Perugia for her further education.

Monica started her career at the age of 13 as a model posing for the local photo enthusiast. Later she moved to Milan fashion center where she signed a contract with Elite Model Management. Apart from Milan fashion she also posed for Dolce and Gabbana and French Elle.

Monica moved to the career of acting from modeling and played minor roles in Vita coi figli in 1990, La Riffa (1991), and Bram Stoker’s Dracula (1992). Monica was also nominated for Cesar Award for her role in the film The Apartment as Lisa. Meanwhile, she became very famous as an actress and portrayed many roles in many movies like Briganti, I Mitici, Snowball, Bits, and Pieces, Joseph.

In 2000 she was seen as Malena Scordia in the movie Malena and Chantal Hearst in the movie Under Suspicion. In 2003 Monica was on Maxim. She was also named as the 100 Hottest Women of All-Time in its 21st position and was considered as an Italian Sex Symbol.

In 2003, her career took a new turn. She played the movie The Matrix Reloaded, Enter The Matrix, and The Matrix Revolutions as Persephone. Her other roles were in the movie Secret Agents, She Hates Me, How Much Do You Love Me, Napoleon and Me, Manual of Love 2, Sanguepazzo. In 2010, once again she posed semi-nude and pregnant in the April 2010 issue. Monica was also the face of brand Dior from 2006 – 2010.

In 2007 she portrayed the role of Sonia Gandhi in the biopic Sonia. Monica also gave her voice in Prince of Persia: Warrior Within and in the French movie Robots. Her other films include The Whistleblower, The Burning Hot Summer, Rhino Season, The Wonders.

Her career took another height when she played the role, Lucia Sciarra, in the film series of James Bond Spectre. In such a long run she won two awards, first as a Silver Ribbon for Best Supporting Actress and second as European Golden Globe, and nine nominations.

Monica Bellucci: Salary and Net Worth

Her total net worth is $45 million and her salary is $7 million.

Rumors were that Monica will be back as a Bond girl.

Monica was in controversy twice the first in 2004 when she posed nude for the first time. Her nude photo was viral on media and the internet and secondly for the same reason in 2010 again while posing semi-nude.

Monica Bellucci has a height of 5 feet 7 inches. Her body weighs 64kg. Her hair is dark brown in color and she has a pair of brown eyes. Her body measurements are  37-25-36 inches. Her shoe size is 10US, the dress size is 8US and the bra size is 34c.