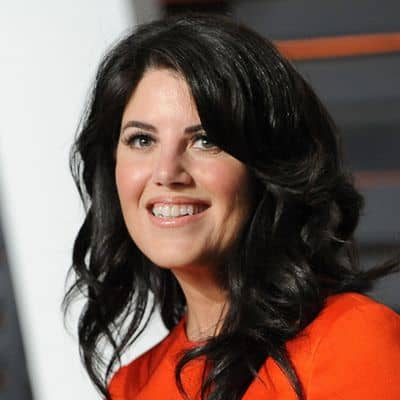 Talking about her love life, Monica Lewinsky is presently single and she is not dating anyone at the moment. Her only publicly known relationship is with then-president Bill Clinton. Other than that, she has not stated her relationship details or affair news in the public.

It seems that the famed personality does not prefer sharing her thoughts with the public.

Who is Monica Lewinsky?

Moreover, her affair case was one of the most controversial high-profile political sex scandals in the history of America.

Monica Lewinsky was born on 23 July 1973. At present, her age is 48 years old. Likewise, her birthplace is San Fransisco, California, the USA.

Monica is the daughter of her father, Bernard Lewinsky whereas her mother is Marcia Kay Vilensky. Her dad is an oncologist whereas her mom is an author. Moreover, she has a brother named Michael Lewinsky.

Talking about her nationality, Lewinsky holds an American identity whereas her ethnicity is Ashkenazi Jewish.

Regarding education, the activist attended Sinai Akiba Academy. Later, she joined the John Thomas Dye School in Bel-Air. She then attended Beverly Hills High School for her first three years of high school and later transferred to Bel Air Prep for her senior year and graduate in 1991.

Monica then studied at Santa Monica College and worked for the drama department at Beverly Hills High School. Finally, she completed her bachelor’s degree in psychology in 1995 from Lewis & Clark College in Portland, Oregon.

Moreover, after her scandal with then-president, Bill Clinton, Monika earned high attention and a sum of money from her biography and her interviews that were watched by more than 70 million American citizens.

Monica in addition appeared as a guest on Saturday Night Live on 8 May 1999 appearing in two sketches. In January 2000, she began doing commercials for Jenny Craig, Inc. However, the company caused controversy by choosing Monica as their spokeswoman. Later, the businesswoman featured on The Tom Green Show and her own show, Monica’s Postcards on Channel 5 in the U.K.

Meanwhile, the media personality also hosted a reality television dating program, Mr. Personality on Fox Television Network in 2003. In the same year, Lewinsky also featured as a guest on the programs V Graham Norton in the UK, High Chaparall in Sweden, and The View and Jimmy Kimmel Live! in the U.S.

Recently, in 2019, Monica talked about public shaming on Last Week Tonight with John Oliver. She is working as a producer on the third season of Ryan Murphy’s “American Crime Story”.

A famed multi-talented personality, Lewinsky has earned a handsome amount of money from her profession. She has been active in her profession from the year 1995 till the present.

It is reported that Monica Lewinsky has an estimated net worth of $1.5 million. Likewise, her annual salary is expected to be nearly $40,000. After publishing her first book, Monica’s story, she was paid a sum of $500,000.

In 2000, Lewinsky started featuring in TV commercials for the diet company Jenny Craig, Inc. She also made a contract of $1 million for losing 40 or more pounds in six months. Sadly, the company paid her only $300,000 of the  $1 million contracts.

The businessperson is also an ambassador and strategic advisor for the anti-bullying organization Bystander Revolution. She rented a luxurious apartment and has led quite a lavish lifestyle. Her fleet of cars includes a Mini Cooper and a Cadillac.

Additionally, Clinton also mentioned that the allegation of sexual misconduct during his time as Governor of Arkansas. Later, Clinton accepted that he had an illicit physical relationship with Monica.

In 2005, Monica shifted to London because of the media frenzy which affected her personal and professional life. She later confessed in an interview with People magazine which took place in 2015.

48 years old star, Monica has beautiful looks and an admirable personality. She stands at a height of 5 feet 6 inches. Also, she has a balanced bodyweight of 73 kg.

Furthermore, Lewinsky has black eyes whereas her hair is dark brown. Her body measurement is 39-27-38 inches(chest-waist-hip) respectively.

Regarding her social media presence, Monica Lewinsky is an active personality on social media. Monica has more than a 1.1million followers on her official Twitter account @MonicaLewinsky.

Moreover, Lewinsky is also available on Facebook with nearly 142k fans and supporters.