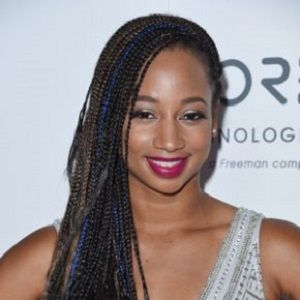 In case of emergency, do whatever your best friends tell you to do

As an African American actress, there are people who have been staples in my life that opened a door that I can walk through. I hope that I can have that impact

High School Musical' is definitely the best thing that's happened to my career and I walked away with great friends from it.

Monique is a married woman. She is married to her longtime boyfriend Walter Jordan. The couple dated for a long period sharing their romantic relationship on and off media spotting them in various parties and events. The couple later got married on 14 February 2012 which according to the calendar is also known as Valentine’s Day. A day for couples and their new and existing relationships. The couple got married in a solitary place in Koh Samui, Thailand.

Who is Monique Coleman?

Monique Coleman is an American actress, dancer, singer, entrepreneur, and philanthropist. She is famous for her role in High School Musical movie as Taylor McKessie. She also had a role as Mary–Margaret in The Suite Life of Zack & Cody. She was also a popular dancer in Dancing with the Stars finishing in fourth place. Monique’s is also famous for his online talk show Gimme Mo.

Monique Coleman was born on 13 November 1980 in Orangeburg, South Carolina USA. Her nationality is American and ethnicity is African-American.

Monique’s mother is Roz Coleman. She has two sisters, her elder sister is Kaylie and her younger sister is Amelia.

At a young age, she started to take training at Workshop Theatre School of Dramatic Arts. Monique Coleman went to Heathwood Hall Episcopal School. She was involved in plays to competing in forensic tournaments, volunteering with abused children, running track, and even cheerleading from his school. Then she attended The Theatre School at DePaul University in Chicago. She received her BFA in acting in 2002.

Monique had her first commercial when she was taking a class by a guest teacher, which turned to be an audition. After which she got a chance to work in several commercials. Monique’s first lead role was in “Mother of River” which won many awards at Chicago Film Festival.

Few year later she was seen as Donna in The Ditch Digger’s Daughter which led her to the nomination of Young Artist Award. She also wrote, produced, directed and starred in “Voice From Within” show at her high school. She was also a guest star of The Suite Life of Zack & Cody episodes.

His another 7 guest appearance on television was Boston Public, Gilmore Girls, Malcolm in the Middle, Strong Medicine, 10-8: Officers on Duty, Married to the Kellys, and Veronica Mars. Monique’s fame raised to heights when she did the role in High School Musical film as Taylor McKessie.

Her talent as a dancer was seen in “Dancing with the Stars” third edition. She was partnering with Louis Van Amstel in the whole competition. Monique was eliminated at the fourth position being the last female dancer of the season. She also partook in the tour that took her across America with a team of Dancing with the Stars.

Monique was presented with a letter of recognition by Assistant Secretary-General Jomo Kwame Sundaram of the Department of Economic and Social Affairs at its UN headquarter. Mr. Sundaram stated that she will work to raise awareness about the challenges young people face and will highlight the positive contribution they make to their communities.

Monique worked with dosomething.org to produce a “Do Something U” video tutorial which was focused on utilizing the correct way of social media for teaching the youths.

Monique Coleman: Salary and Net Worth

There was once a rumor that the couple is expecting a child because she was seen tossing a glass full of water with wine many times. Because it is said that alcohols can make complications during pregnancy, the tossing of water made a huge rumor for Monique.

She was once in rumor for dating with Corbin Bleu because of his on-screen chemistry his fans expected them to be the same in off-screen. She was in controversy when she said that she had no money in the bank and got evicted from her apartment! Plus, she says that she wasn’t even able to watch the film on her own television because she couldn’t afford to use the network.

Monique has the height of 5 feet 2 inches. Her body weighs 48kg. She has black hair and dark brown eyes. Furthermore, her bra size is 34C, shoe size is 7 US and dress size is 4 US. Her body measurements are 34-26-35 inches.