Updated On January 23, 2023 | Published By: Neil Richard
Share this
Married 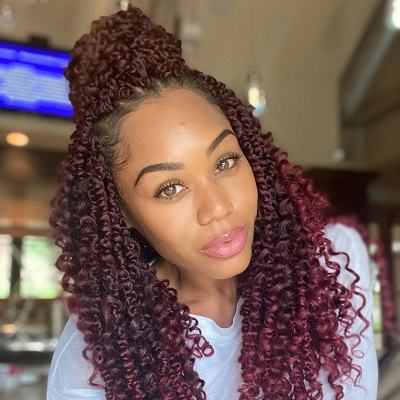 Monique Samuels is married to Chris Samuels. Her husband, Chris is a former football career.

She first met Chris when she moved to Washington DC. Later, the couple started dating each other.

On the 3rd of March 2012, they exchanged vows with each other.

The wedding took place at the Ronald Reagen Building in Washington.

Early, she suffered from a miscarriage while she was expecting her third child.

Who is Monique Samuels?

Monique Samuels is a reality TV Star and entrepreneur.

She is renowned as the main cast of the TV series, The Real Housewives of Potomac.

Last, in July 2020, she launched her music video, Drag Queens.

Monique Samuels was born Monique Cox on the 6th of October 1983 in Pleasantville, New Jersey.

She is of Jewish-British ethnicity.

To date, she has not shared any details about her father, mother, and siblings.

Talking about her educational background, she graduated from High School as a salutatorian.

After that, she moved to Pittsburgh and joined Duquesne University on a full scholarship.

However, she dropped out of University to pursue her career as a music artist.

Later, she joined the University of Alabama and earned a business degree.

She moved to Washington DC to pursue her career as a music artist. However, she pursued her career in business.

As a manager, she handled the business of her husband. That includes real estate and investment companies.

Also, she handled the Chris Samuels Foundation too.

Apart from that, Monique Samuels also writes for the blog, Not For Lazy Moms.

Later, in 2018, she launched her own podcast, Not For Lazy Moms too.

Also, she founded the I’m B.O.S.S foundation. The foundation works based on the community-led mentorship and leadership program that leads and inspires the youth of the country.

Besides all that, she came into the limelight with the series, The Real Housewives of Potomac.

She joined the reality TV series as the main cast of the show during the 2nd season of the show.

Currently, she is appearing as the main cast of the series.

Recently, on the 2nd of August 2020, the series premiere episode was aired.

As of now, she is resuming her career as a music artist too. Last, she dropped her music video, Drag Queens.

In 2022, she returned to reality television opposites her husband in the series Love & Marriage: DC which premiered in May 2022.

Her earnings as a reality TV star are in the range of $50k or above.

Apart from that, she also makes her blogs too.

Besides that, as a podcaster, her earnings are $87k or above.

She had been in the headlines when she got involved with the second-degree assault with Candiace Dillard.

Dillard and Samuels had been best friends with each other since they met first in the third season of the show, The Real Housewives of Potomac.

However, the former best friend turned into their worst enemy of each other now.

The matter got worst when both of them got into a physical dispute during a dinner party.

Later, both of them accused each other of second-degree assault and filed complaints to the District Court of Montgomery County in Maryland.

However, the Office of the State’s Attorney dismissed the charges.

She stands at a height of 5 feet 5 inches and weighs around 57 kg.

You may also read the bio of Alex McCord, Dylan Summerall, and Emily Simpson.

Monique Samuels is pregnant! Her happiness is double-fold on this conception after her miscarriage!