Monta Ellis is an American professional basketball player. The NBA player is married and a father of two.

Monta Ellis is a married man. He is married to Juanika Amos Ellis. She is a Memphis police officer. Juanika is 6 years older than him. The pair first met in Juanika’s hometown, Memphis, Tennessee in 2006.

After four years, they decided to tie the knot. The wedding ceremony took place at the Mississippi Boulevard Christian Church in 2010.

The couple has two children from the marriage, a son Monta Ellis Jr, and a daughter Myla Jai Ellis.

In 2016, he had an affair with another girl while married. In fact, there is a video of it online. Despite the cheating affairs, their relationship is going strong. 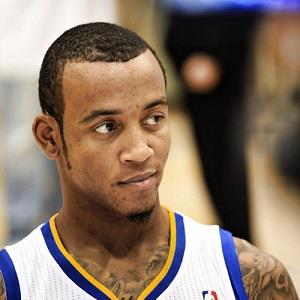 Nobody gives a rat's nipple about me

I'm not trying to put any more pressure on me because it's the playoffs.

Who is Monta Ellis?

Monta Ellis is an American professional basketball-free agent. He last played for the Indiana Pacers of the National Basketball Association. He became a free agent in 2015 before signing with the Pacers.

Ellis was born in Jackson, Mississippi on October 26, 1985, to Marcella Singleton and Rosa Ellis.  His name (pronounced Mon-Tay) is short for Montana, his grandfather‘s name. Furthermore, he was one of three brothers.

He had a rough childhood as a single mother raised him and they lived in a house in the Georgetown section of Jackson. Since his brother Antwain was the best basketball player in the neighborhood, basketball was a major part of his early life.

Moreover, Ellis learned from his brother Antwain about the game a lot. He belongs to the African-American ethnicity and holds an American nationality.

Talking about his education, Ellis attended Lanier High School in Jackson. He became the Parade Magazine High School Player of the Year 2005 and a USA Today All-American his senior year during his time there.

Monta Ellis scored his career-high 72 points in a game against Greenwood High School. Next, he scored 67 points in an 80–75 loss against renowned high school basketball powerhouse Oak Hill Academy.

For his senior season, he scored 42 points in a game against South Gwinnett High School. In addition, he led Lanier to a 129–16 record in his four seasons as a starter, winning the 4A state championship in both 2002 and 2005.

Rivals.com considered him a five-star recruit. Although he initially committed to Mississippi State University, he later decided to enter the NBA draft. He hit his first career game-winning shot as time expired on January 24, 2007, to give the Warriors a 110–109 victory over the New Jersey Nets.

For the 2013–14 season, won Western Conference Player of the Week honors for the week of April 7 to 13 after averaging 25.7 points and 4.7 assists, 4 rebounds, and a steal in three games. After the 2014–15 season, he opted out of his contract with the Mavericks, becoming a free agent.

Ellis was part of a controversy after a former employee of the Golden State Warriors Erika Ross Smith filed a sexual harassment lawsuit in Alameda County against the team and him. She claimed that Ellis sent unwanted texts that included propositions for sexual encounters and a lewd photo.

Talking about the body measurement, Monta Ellis has a height of 6 feet 3 inches (1.91 m). In addition, he weighs 80kg or 177lbs. Additionally, his hair color and eye color are black.

Ellis is fairly active over social media. He has a huge number of followers on social networking sites such as Facebook as well as Instagram.

NBA Player Monta Ellis married with 2 children: Sued for Harassment!! Find out more about the Case as well as his Career, Love life and many more…