Morena Baccarin is an actress of Stargate: The Ark of Truth, V, Deadpool, & Homeland. 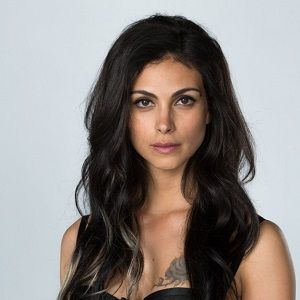 I've had long hair, I've had short hair, and I've had in between hair... and its all good.

You like to think that you're bigger than your traditions and customs, but they form who you are.

All I think about is my son, my family, and my future family.

In September 2015, Baccarin said in a legal declaration involving her divorce that she planned to marry her Gotham co-star, Ben McKenzie, adding that she was pregnant with their child.

The couple has a daughter, Frances Laiz Setta Schenkkan, born March 2, 2016. Baccarin and McKenzie announced their engagement in November 2016. And the couple tied the knot on 2 June 2017, in New York City.

Who is Morena Baccarin?

Morena Baccarin is a Brazilian-American actress. She is known for her roles in Firefly, Serenity, Stargate SG-1, Stargate: The Ark of Truth, V, Deadpool, & Homeland (for which she received an Emmy nomination for Outstanding Supporting Actress in a Drama Series in 2013). Baccarin plays the role of Dr. Leslie Thompkins in Gotham.

Baccarin was born on June 2, 1979, in Rio de Janeiro. She is of Italian and Brazilian Portuguese descent.

Her birth name is Morena Silva de Vaz Setta Baccarin. She was born to Vera Setta, an actress, and Fernando Baccarin, a journalist. When 7, she moved with her family to Greenwich Village, New York.

She later attended the Fiorello H. LaGuardia High School of Music & Art and Performing Arts before she entered the theater program at the Juilliard School, where she was in the Drama Division’s Group 29 (1996–2000).

Baccarin landed her first film role in the improvised fashion world comedy Perfume in 2001. This was followed by a lead role in Way Off-Broadway in the same year.

She served as Natalie Portman’s understudy in the Central Park production of The Seagull. The sci-fi drama Firefly (2002) was Baccarin’s first television series. She reprised her role of Inara Serra in the 2005 film Serenity.

From 2003-04, she appeared as Maggie Jones in 6 episodes of the TV series, Still Life. Next year in 2004, she appeared in the TV movie, It’s Always Sunny on TV, as Carmen, a male-to-female transsexual. In February 2005, Baccarin provided the voice for Black Canary in multiple episodes of the animated series Justice League Unlimited.

She next guest-starred in 3 episodes of the TV series The O.C. in 2006. It was announced in April 2006 that Baccarin would be playing the adult version of Adria, a recurring villain in the tenth season of Stargate SG-1. She first appeared in the season 10 episode “Counterstrike” as an adult Adria. Baccarin reprised her role as Adria in the movie Stargate: The Ark of Truth. The same year, she also appeared in Justice, How I Met Your Mother, & Kitchen Confidential.

In 2007, she played in Las Vegas, Heartland, and Sands of Oblivion. The next year, she appeared in T Takes: Room 111, T Takes: Morena Baccarin, Numb3rs, Dirt, etc.

In May 2009, Baccarin made her Off-Broadway debut in television satire Our House. She landed the lead role of Anna, the leader of the alien Visitors, in 2009–11 series V. In May 2011, shortly following the airing of the show’s second season finale, it was announced that the show would not return for a third season. That same month, Baccarin joined the cast of the Showtime television drama Homeland, for which she received good notices for her role. On July 18, 2013, she was nominated for Outstanding Supporting Actress in a Drama Series at the 2013 Primetime Emmy Awards.

She has provided voice work for Talia al Ghul in Son of Batman, Batman: Bad Blood; Cheetah in Batman: The Brave and the Bold, and, Gideon in the series The Flash.

She voiced the character of Gamemaster in Malevolent in 2017. Baccarin will reprise her role as Vanessa in the sequel to Deadpool, entitled Deadpool 2, in 2018.

Morena Baccarin: Salary and Net Worth

There were rumors that Baccarin was in a relationship with her Gotham co-star Ben McKenzie, which was later confirmed.

Morena has a height of 5 feet 7.5 inches and weighs 57 kg. Her hair color is black and her eye color is light brown. Her body measurement is 34-24-37 inches and wears a bra size of 32B. She wears a dress size of 8(US). Her shoe size is unknown.