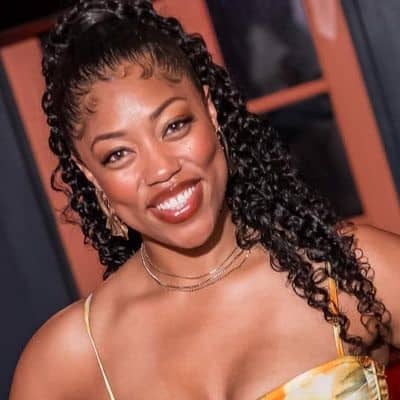 Morgan Harvey is living a blissful conjugal life. She is married to Kareem Hawthorne, a.k.a DJ Bruckup. Kareem is a DJ by profession. They started dating while both of them were in college at Spelman circa 2006.

After dating for half a decade the duo decided to take their relationship to next level. On October 12, 2013, the lovebirds exchanged their vows at the Cathedral of St. Philip in Atlanta. Similarly, Morgan gave birth to a beautiful daughter named Elle Hawthrone on March 22, 2015.

Who is Morgan Harvey?

Morgan Harvey is a food blogger and cookbook author from the United States. She gained popularity in the media as a stepdaughter of famous television personality and award-winning talk show host Steve Harvey and Fashionista Marjorie Elaine Harvey.

Morgan was born on June 1, 1987, in the United States. According to her birth date, she is 34 years old as of 2021. Her nationality is American and her ethnicity is All-American.

The name of her parents is Darnell Woods (biological father) and Marjorie Bridges (mother). Darnell was a drug dealer as per the sources. Before Darnell, her mother was married to Jin Townsend who is also a drug dealer and was sentenced to jail too.

Later on, Majorie got married to comedian and television host Steve Harvey. She has two siblings named Lori Jarvey and Jason Harvey. Lori is a model by profession and Jason is a footwear designer and the founder of a women’s footwear company, Yevrah.

Morgan attended the Culinary Institute of America and graduated in the year 2011 with a degree in Banking and Pastry.

After graduation, Morgan started shares her cooking recipes online. She established her own brand called “I Need Some Mo” which she created to share her love for the kitchen and easy, yet delicious recipes with the world. She also starred in her stepfather’s show with her special recipes.

Aside from this, Morgan is the author of the e-book “Party Heart” which is full of fun, party recipes including those that she created for her daughter’s second birthday. Similarly, she shares her ideas and tip for social events and cocktail recipes. Furthermore, she runs the production company East One Twelve along with her life partner, Morgan. She also leads the company Harvey Events under Steven Harvey Global,  which Steve founded in 2017.

Morgan has managed to maintain a clean profile to date. He hasn’t been part of sorts of rumors and controversial acts that could hamper her personal and professional life.

Morgan is very private about her fortune. So, she hasn’t yet disclosed her actual net worth, salary, and other earnings in the media.

Talking about her physical appearance, she has brown pair of eyes and dark brown hair color. Further, there are no details available regarding her height, weight, and other body stats.