Pressel had met Andy Bush, a senior vice president at Octagon Global Events, at a pro-am event in 2007. The two finally married in January 2013. They reside in Boca Raton, Florida and are enjoying their married life together. The couple does not have any child yet. 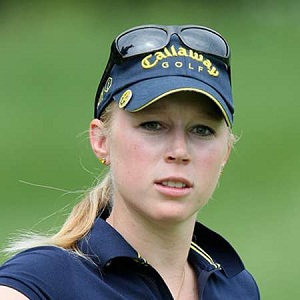 You definitely know when she's coming

Harder than it had to be ... that's for sure. I was struggling to make solid contact.

Who is Morgan Pressel?

Morgan Pressel is an American professional golfer. She is currently playing on the LPGA Tour. Morgan Pressel  is the youngest-ever winner of a modern LPGA major championship. This vaulted her to a career-high fourth in the world rankings.

Pressel was born Morgan Lee Pressel on May 23, 1988, in Tampa, Florida. Her nationality is American and ethnicity is Jewish.

She was born to Mike Pressel(father) and Kathy Krickstein Pressel(mother). She has a sister, Madison Pressel.

After her mother’s death from breast cancer, 15-year-old Pressel moved in with her maternal grandparents, while her two younger siblings stayed with their father. Her grandparents are the parents of former top-10 tennis player Aaron Krickstein, her uncle.

She attended Banyan Creek Elementary School, Omni Middle School, and graduated in 2006 from the Saint Andrew’s School in Boca Raton which is a private school affiliated with the Episcopal Church.

Pressel started playing golf at the national level from a very young age. In 2001, at 12, she became the youngest player to qualify for the U.S. Women’s Open. This record stood until 2007.

At the age of 17, she was one of 3 co-leaders starting the final round of the 2005 U.S. Women’s Open. Her second-place finish gave her a share of the low amateur honors with Brittany Lang. Pressel played in a total of seven LPGA events in 2005 and made the cut in all of them.

Pressel finished sixth in the first stage of the LPGA Qualifying Tournament in September 2005 and advanced to the final stage in December. She turned professional in November, after appealing to the LPGA to become a member as a 17-year-old. At the five-round Final Qualifying Tournament in Daytona Beach, she finished tied for sixth to earn her tour card for 2006. She played part-time on the tour until her high school graduation in May 2006.

Pressel earned her first victory in 2007 at the Kraft Nabisco Championship and became the youngest-ever winner of a modern LPGA major, a record that would stand until Lydia Ko won the 2015 Evian Championship. The win moved her from 17th in the world rankings to fourth.

In the 2012 Sybase Match Play Championship, Pressel was in contention for her third LPGA Tour victory in the semi-finals. She lost the match and Muñoz won the tournament.

On April 26, 2015, Pressel came in second at the Swinging Skirts LPGA Classic. Ko won on the second playoff hole. Pressel’s last victory was in 2008 at the Kapalua LPGA Classic.

She is represented by Wasserman Media Group and has endorsement deals with Callaway Golf, Polo Ralph Lauren, Royal Bank of Canada, and Audemars Piguet.

Morgan Pressel: Salary and Net Worth

Morgan has a height of 5 feet 5 inches. Her body weight is not known. Furthermore, she has blonde hair and hazel blue eyes.