Morgan Simianer is dating a baseball player, Brad Markey for a couple of years. They are romantically involved for several years and are frequently seen posting romantic affairs on social media. They are very much concerned about their relationship. 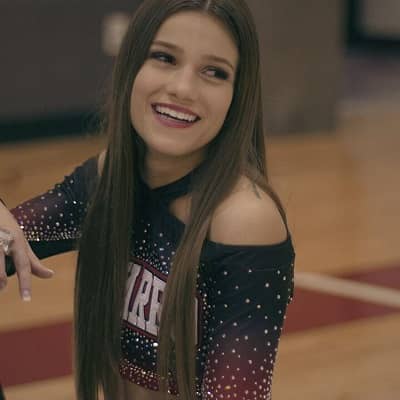 Morgan Simianer is a social media sensation, cheerleader, and actress who is most popular for her appearance in the Netflix docuseries Cheer.

Simianer has not revealed the identity of her parents. However, she and her brother Wyatt lived with her father, his new wife, and their step-siblings as their mother left them when they were very young. She and her brother grew up in Texas, USA. Later, she lived alone in the trailer when her brother was aged 18 as he went to look for their mother.

She is of American nationality and has a birth sign, Libra. Talking about her education, she attended Navarro College in Corsicana, Texas, and was a member of the cheer team.

Morgan Simianer started her career when she joined Navarro College in Corsicana, Texas, and became a member of a cheer team. Since her arrival, she has helped her squad win two national championships.

Since 2012, Navarro has also won the NCA Grand National Championship. Moreover, she recently appeared on the Netflix docuseries, Cheer, and gained a lot of hype.

She has been a member of the Navarro cheer team for over two years and In January 2020, she made her appearance on The Ellen DeGeneres Show with other members of the team.

As of now with her modeling, cheerleading, and TV shows, she has saved quite a decent amount of money. So, there are sources that claim she has an estimated net worth of around $400K.

There are no rumors and controversies about her professional or private life.

Morgan has a gorgeous body with 34-24-33 inches of body measurements. She has dark brown color hair and dark brown hair too. Further, she stands 5 feet and 1 inch tall and weighs around 46 kg.

Being an Instagram sensation and cheerleader, we can assume that she must have a huge amount of followers on social media. She has more than 1.2m followers on Instagram and over 26.9k followers on Twitter. Furthermore, she has been loved and liked by nearly 2k  on Facebook.