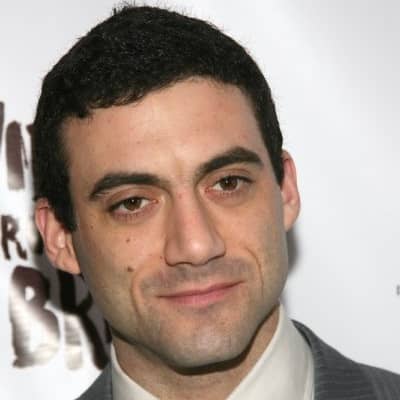 Morgan Spector is a married man. He has exchanged vows with an actress Rebecca Hall on 26th September 2015, in Saugerties, New York. This couple first met during their work together in the Broadway play Machinal and started dating in 2014.

Who is Morgan Spector?

Morgan Spector is an American producer, voice artist, and actor. He is best known for his roles in a show named The Mist.

This actor was born on 4 October 1980, in California, the US with a birth name Morgan Michael Spector. His father‘s name is Stephen, an attorney and his mother’s name is Jane, a teacher.

He graduated from Reed College, in Portland. Afterward, he attended an acting school of the American Conservatory Theater, San Francisco.

He belongs to Ashkenazi Jewish, and Irish descent.

After learning acting from the American Conservatory Theater, Morgan Spector began working in regional theater. He also toured with The Lion King. He moved to New York in 2006 to pursue his career.

Morgan made his film debut in 2004 in Raspberry Heaven as Kurt Callaway. Afterward, Spector made his Broadway debut in 2006 as Rodolpho in A View from the Bridge.

He starred in several movies including The Last Airbender, Musical Chairs, All is Bright, Burning Blue, The Drop, Christine, Chuck.

In 2017, he played in Split, Man With Van, and Permission. The next year, he made his appearances as Sadie’s Husband in A Vigilante.

Morgan made his television debut in 2009 television series Law & Order: Criminal Intent. The next year, he played Scott in 2 episodes of How To Make It In America.

Between 2011-2013, he made a recurring role in Person of Interest. Afterward, In 2013, he starred in Do No Harm, Orange is the New Black, Boardwalk Empire, and Zero Hour.

Spector has made his appearances in several TV series like Unforgettable, Allegiance, The Mist, Homeland, Suits, Pearson. Later, in 2020, he played the main role of Herman Levin in The Plot Against America.

According to some news, Morgan Spector is playing George Russell in the upcoming historical drama series The Gilded Age.

The salary of this actor is under review. Meanwhile, according to some sources, he has an estimated net worth of $1.6 million.

There is no rumor and scandal about Spector. Meanwhile, he has managed to keep himself out of any controversy and rumor. He is doing well in his career.

Morgan is not active on social sites including Facebook, Instagram, and Twitter. He loves to spend quality time with his family rather than on social media.