Gorgeous blonde, Morgan Stewart is the reality TV star of Rich Kids of Beverly Hills. She is also a creative director of her own brand. Morgan filed for the divorce from Brendan Fitzpatrick in October 2019.

Morgan Stewart is married to singer Jordan McGraw on 9th December 2020. Due to Covid, the couple had a small at-home wedding affair. She got engaged to the musician in July 2020.

Morgan and her husband became the parents of Row Renggli McGraw. Their daughter was born on 16th February 2021. She described that she had 30 hours of labor during the birth of her baby.

This couple in Sep 2021, announced the news of their second kid. Jordan shared the news by captioning round 2.

On 25 October 2019, Morgan filed for a divorce from Brendan after three years of marriage because of irrecoverable differences.

She was married to her boyfriend, Brendan Fitzpatrick. He is a reality star. He proposed her in ‘Rich Kids of Beverly Hills’ where both were featured. The couple engaged on March 6, 2015.

They tied the knot on May 7, 2016, in at Hummingbird Nest Ranch in Santa Susana. Only their close friends and family were invited to the wedding. Around 150 guests were called. 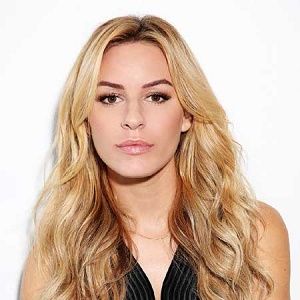 I have so many facets to me.

My blood would probably be glittery. Almost like the Capri Sun commercial. Or Alex Mack when she melts down. But like in a pink color.

It wasn’t until it was printed in Forbes that I knew how much money we had.

Who is Morgan Stewart?

Morgan Stewart is an American reality star and a blogger.

She is also a creative director of her own fashion and beauty blog.

Moreover, she was starred in Rich Kids of Beverly Hills.

Morgan was born on 22nd May 1988, in Beverly Hills, California, United States. She belongs to Scottish heritage.

Her mother’s name is Susan Stewart and her father’s name is Herb Stewart. Her dad is an architect as well as an owner and president of H Construct, Inc.

She seems to be a single child as there is no information about her siblings.

Stewart attended Pace University, New York but she did not graduate because she dropped out. While there is no information on which school she attended.

Morgan Stewart was born with a silver spoon. So her parent was the one who motivated her to build her career in what she wanted.

She was featured in the show Rich Kids of Beverly Kids’ fourth season in the year 2016. She was on the show with her husband, Brendan Fitzpatrick, and other stars: Jonny Drubel, Dorothy Wang, EJ Johnson, and Brandon Cyrus.

Furthermore, she started her blog for women’s empowerment.

Morgan is the sole daughter of the millionaire parents. Also, she had done a reality show and has her own blog. As of 2022, her net worth is estimated to be $5 million.

This reality personality is keeping herself away from any desperate rumors as well as scandals.

Morgan Stewart has a height of 5 feet 5 inches and weighs 55 kg. Her hair color is blonde and her eye color is brown.

Her other body measurements like shoe size, dress size, etc. are unknown.

Does Morgan Stewart have any kids?