Updated On January 17, 2022 | In controversy , Dating , Relationship
Share this 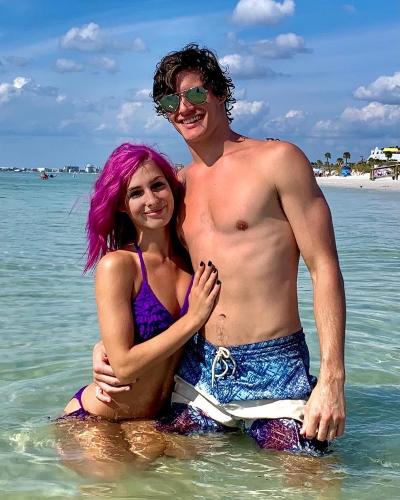 The reality star Moriah Plath, 19 released her first single titled “Missed Myself” on Saturday, January 15, 2022. She is presently in a relationship with a guy named Max Kallschmidt.

The song instantly caught the attention of the public with the lyrics such as “Like heavy chains pulling me / I let you get the best of me / But that won’t mean / You can control who I’ll be,”

The Fans speculated that the singer have broken up with her boyfriend Max Kallschmidt. However, the rumors don’t seem to be true. Moriah recently shared a video along with her boyfriend, Max to announce the news about her first single.

In the video, the duo seems chilling on the beach.

Also read “Who is reality TV star Brooks Ayers married to? Know about his past relationship with Vicki Gonvalson, net worth, social media”

Max is presently studying at Tallahassee Community College majored in building construction management. He is an athlete who played football and soccer during his high school in Florida.

Kallschmidt is active on Instagram under the username @maxkall2.0. He wrote on his IG bio that he is the owner of “Anchor 23 Marketing LLC”. He loves the outdoors and being one with nature.

The beautiful couple began dating in the year 2020. In June, Moriah made an official announcement about her relationship with Max via IG and captioned,

“My Peter Pan came for me and I thought I could keep you a secret a little longer but I can’t… I love you @maxkall2.0”

The two together also featured on the reality series, Welcome to Plathcille. On May 15, 2021, the couple celebrates their one-year anniversary.

Max posts cozy pictures and videos on Instagram with caption,

“One whole year of memories with my best friend, So much I could say. But I’ll keep it simple. I love you Moriah Jasper”

Moriah is an American well-renowned television reality personality. She rose to fame after appearing on the TLC reality series, Welcome to Plathcille. Plath is the second oldest daughter and the fourth oldest child in her family.

She was born to Barry Plath (father) and Kim Plath (mother). Plath has eight siblings named Ethan, Hosanna, Micah, Lydia, Isaac, Amber, Cassia, and Mercy. In 2018, she made an appearance in a short film, ‘You Should Be There’ where she portrayed the role of young rebel Brittany.

Besides, she recently released her first single “Missed Myself” on January 15, 2022.