Morris Chestnut is a married person. He has been married to Pam Byse who is also a native of California. The couple tied their knot in 1995 and welcomed two children: son Grant Chestnut in 1997 and a daughter Paige Chestnut in 1998. The family is currently living together and they are living a very blessed life with each other. 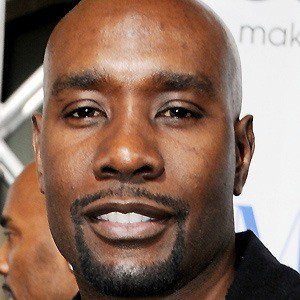 It's hard when you see a scene where it's raining, and we have the rain machine, and you see it for 5 minutes, but that scene takes all day to shoot, and you do it with rain, and the dry off, and go back and do it again.

Unless you are really grounded and have a true sense of reality, you can get lost in that and a lot of people do and that's why you see so many people with successful careers but with destructive lives.

And I think from a male perspective, we have men talking about their feelings and it being okay.

Who is Morris Chestnut?

Morris Chestnut is a famous American actor and fitness writer who is popular for his role in the 1991 film ‘Boyz N The Hood’.

Morris holds American citizenship and his ethnicity is African-American.

He attended Richard Gahr High School and graduated from there in 1986. After that, he studied finance and drama at California State University, Northridge.

He began his career from the role of Jadon on ‘Freedy’s Nightmares: A Nightmare on Elm Street. His first film appearance was from the role of Ricky Baker in ‘Boyz n the Hood’ in 1991 and he followed that up with roles in various TV movies.

Later, he appeared on Patti LaBelle’s short-lived sitcom ‘Out All Night’ and then appeared in standard big-budget studio films such as ‘Under Siege 2: Dark Territory’ in 1995 and ‘G.I. Jane’ in 1997.

Morris Chestnut has portrayed the regular role of Special Agent Mal Robison on ‘C-16’ from 1997 to 1998. Similarly, he starred as a professional football player in ‘The Best Man’ along with Taye Diggs and Nia Long. Again, he portrayed the role of a football player in ‘The Game Plan’ in 2007 and starred in ‘The Brothers’ in 2001. Also, he was named as one of the Sexiest Men Alive for 2015 by People magazine.

In order to prepare him for the role of a professional football player, Lance Sullivan, in the film ‘The Best Man Holiday, he had to get back into shape, and audiences were impressed by his physique. Also, a book titled ‘The Cut’ was authored along with Celebrity Fitness Trainer Obi Obadike. The book was published on April 18, 2017.

He has an estimated net worth of around $10 million as of 2022 and he has earned that sum of money from his professional career. Also, he earns from brand promotions and from commercials. However, his salary and income are unknown.

There was a rumor that he was gay but he denied the rumor. Also, there was a  rumor that he separated from his wife, Pam because he was cheating on his wife and he told her that the rumors were a lie and there are no signs of quitting between them.

He has a height of 5 ft. 11 inches and weighs 88 kg. Also, Morris Chestnut has dark brown and black hair. He maintains his looks and physique as well.