Mother-Daughter time is on; Katie Holmes and Suri Cruise enjoy their vacation at the Beach, Learn more about Katie’s previous relationship 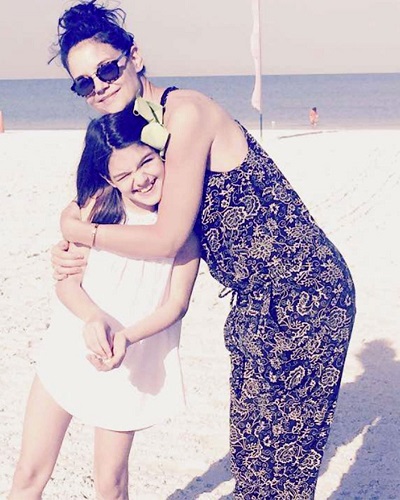 Well, now it is the time to look at some mother-daughter bonding at the beach. Confused? Let me clear you the whole scenario going on this time. Katie Holmes is recently enjoying the Easter Holiday with her family and adorable daughter Suri Cruise at a beach in Florida.

You may like to read Meet the strong and sensible Suri Cruise, teen daughter of Tom Cruise and Katie Holmes!

Katie Holmes has always been close to her fans through her social sites. She shares all the pictures and let all know what’s going on her life.

Recently at the time of Easter Holiday, she reached the beach with her family alongside her cute daughter Suri. She shared many pictures from the vacation. It also included a slow-motion video of Suri throwing a football.

Suri just celebrated her 11th birthday and mother Katie seem quite sentimental. Happy Birthday, Suri. She mentioned her ex-husband Tom Crusie in another snap of their daughter Suri.

The mother-daughter duo posed together on the beach. Suri is in a white dress whereas Holmes is in a printed Isabel Marant jumpsuit and Madewell tortoise-shell sunglasses.

They together had lots of fun at the Easter Holiday.

Her Relation with Ex-Husband Tom Cruise

Katie Holmes was once a married woman. She was previously married to the famous American actor, Tom Cruise. The couple married on November 18, 2006, after dating each other for over a year, Being linked with the same industry, they were very supportive of each other.

They together have a daughter whose name is Suri Cruise, born on April 18, 2006. They divorced on August 20, 2012, after the marriage of six years, It was Katie who filed for divorce and moved out with Suri and she stated that Scientology was a contributing factor for their divorce.

Talking about her previous relationships, Holmes was engaged to the American actor Chris Klein in 2003. They separated in 2005, after the relationship of two years. Read the full story here…

Katie Holmes is a famous American actress, model, and filmmaker, best known for her role as Joey Potter on the teen drama series Dawson’s Creek (1998-2003). She is also famous as April Burns in Pieces of April (2003). The ex-wife of famous American actor, Tom Cruise, Katie Holmes is also the main cast, director, and producer of the 2016 film All We Had. She is See more bio…

Beyonce and Jay Z soon to be a proud parent; Shows a growing baby bump in a Easter celebration, More about their relationship, pregnancy, and married life
Tags : Actress Flimmaker Model