Muniba Mazari is a Pakistani activist, motivational speaker, and artist. 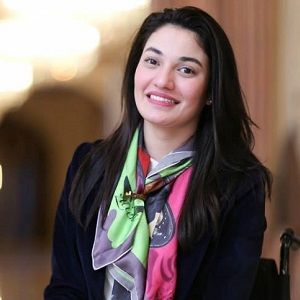 What is the relationship of Muniba Mazari?

Muniba Mazari was previously married to Khurram Shahzad in 2006. However, she was separated from her husband in 2015. She has one son named Neal.

Since she divorced, she has been living a single life and has never been involved in any type of affairs. Moreover, she has never seen any man in the public and media.

As per the reports, currently, Muniba is enjoying her single life and living elegantly.

Who is Muniba Mazari?

Additionally, she is also the National Ambassador for UN Women Pakistan. Back in 2015, she was on the BBC’s 100 most inspirational women list.

Muniba was born on 3 March 1987, in Rahim Yar Khan, Pakistan. Talking about her nationality, she is Pakistani and her ethnicity is Baloch.

Talking about her parents, there is not any information regarding it. However, she has two brothers whose identities are unknown at the moment.

Further, she belongs to the Islam religion.

Talking about her academic qualification, she went to the Army Public School. Later, she attend college in her native home town where she studied for a BFA.

Muniba Mazari began her career as an artist. Later, she also became Pakistan’s first wheelchair-using model. Back in 2007, she had a meta car accident in which she suffered several injuries including a spinal cord that left her paraplegic.

Since then, she began to use the wheelchair and also started modeling. As an artist, she has developed her brand as Muniba’s Canvas with the slogan Let Your Walls Wear Colors.

In addition, Muniba is also a motivational speaker. As of now, she has given motivational talks on multiple platforms such as TEDx, Young Presidents’ Organization, Global Leadership Conference, Vcon Dubai 2017, ad a few more.

Moreover, she also became Pakistan’s first Goodwill Ambassador for UN Women. Back in 2015, she was on the BBC’s 100 most inspirational women list.

Being an artist and motivational speaker, she pockets a handsome amount of money from her profession. However, her net worth and salary are unknown.

So far, Muniba has won an international award for humanitarian efforts. Furthermore, she has also received the laurels Honour Award 2015 by WCCI Lahore Division followed by Shaheen Award 2015.

Once, Muniba was dragged into a controversy after her ex-husband sued her for defamation. Later, the disability movement of Pakistan also separated itself from Muniba due to the allegations.

Motivational Speaker ‘Iron Lady’ Muniba Mazari! From Her Brutal Marriage And Beasty Husband, She Is The Inspiration For All The Women Out There