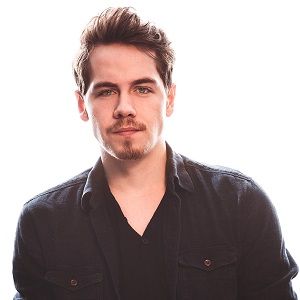 Munro was dating Canadain actress Vanessa Morgan in 2008. The couple dated for only a few months but got separated. Before it, he was rumored to be in relation with Fashion designer and singer Alicia Josipovic.

Then he also dated actress Melinda Shankar. But it also broke up after six months. Now he seems to be single.

Who Is Munro Chambers?

Munro Chambers is one of the popular Canadian actors who is famous for his performances as Nate on Second Jen, as Eli Goldsworthy on Degrassi.

Moreover, he is also famous for playing Wilder in The Latest Buzz. He is also popular also for performing with his twin brother Thomas Chambers.

Munro was born on 29 July 1990 in Ajax, Ontario, Canada. His birth name is Munro Skylar Chambers. He was born in a simple middle-class family.

His fathers’ name is Scott Chambers. And his mother’s name is Lorette Chambers. He also has a twin brother, Thomas Chambers who is two minutes older than him and is an actor too. He also has a younger brother named Michael.

From his young age, he was interested in music and acting. Chambers started his career from his young age when he was just eight years old. He played a secondary role as Rob on the television series Little Men.

Building up his career no sooner he appeared in one of the children’s fantasy movies named A Wrinkle in Time. There he portrayed the role of Sandy Murray and also in Good Fences playing as Billy in 2003.

Chambers has his education at a local high school named Newmarket High School in Newmarket. Then he studies at the University of Ontario.

He had appeared in some movies at his young age, And in 2004, he played Max Shaw in the movie Godsend. It also stars Rebecca Romijn, Robert De Niro, and Cameron Bright. The same year he appeared in the television series Still Game playing the secondary role of Jack along with James Martin.

In 2010 building up his career in acting he starred in Degrassi: The Next Generation as Eli Goldsworthy. Then he appeared in one of the family comedy Beethoven’s Christmas Adventures working along with Kim Rhodes.

Talking about his performance on the big screen, it includes Cracked, The Divide, Turbo Kid, County Crush, and many more. As of 2017, he did two movies which include Sadie’s Last Days on Earth and Wellington.

As he is just building up his career, his works are appreciated but he hasn’t received any of the awards yet.

Munro Chambers: Salary and Net Worth

Muno is in his way of building up his career and leading well. However, his exact net worth and salary are not revealed yet. He must have been doing great financially although his worth is not mentioned in the media.

He wasn’t involved in any of the rumors and controversies any far. He must have a good relationship with all and a good personal and professional life. Once he was rumored to be in relation to Fashion designer and singer Alicia Josipovic.

His hair color is brown and the color of his eyes is blue. He wears size 8 shoes.

With a lot of fan following over his social media sites, you can also follow Munro Chambers on his Twitter and Instagram accounts and get updated with all his latest activities and news.