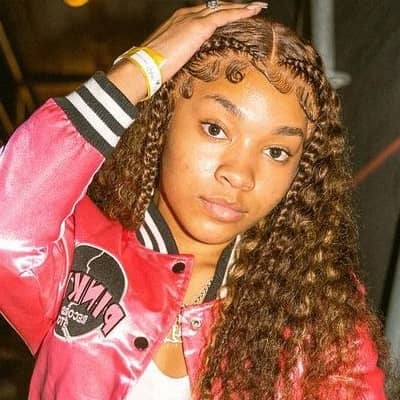 Who is Mya Nicole Johnson?

Mya Nicole Johnson is an American social media personality. She is a popular content creator who is best known as an Instagram star and YouTuber.

Mya was born on the 20th of December 2005, in Houston, Texas, United States. According to her birth date, she is 15 years old. Her Sun sign is Sagittarius.

She hasn’t yet disclosed his parent’s identity in the media. However, she has a younger sister. Also, her education details are under the curtains.

Further, she holds an American nationality whereas she belongs to the African-American ethnicity.

During Mya’s high school years, she was part of the Amateur Athletic Union track and field team. The United Speed Association also sponsored her. On October 5, 2016, she joined the YouTube community with her self-titled channel. Similarly, she uploaded her first video titled “21 Question Game” on July 1, 2019. The video has gained nearly 15k views to date.

She then started uploading fun vlogs, challenges, pranks, and so on. To date, she has uploaded 58 videos on her YouTube channel. His most popular videos are GRWM: FIRST DAY OF SCHOOL || junior year, Side Part Sleek Ponytail Tutorial!, HOW TO MAKE AN OLD WIG LOOK NEW || boiling a wig, BOMB Lace Frontal Application ft BEAUTY FOREVER HAIR, and more.

In August 2020, she posted a Dubsmash video set to the Beyonce song “Hold Up”. She is also a part of a social media group, Tha Bad Kids. Besides, she is also a renowned Tiktok star who is best known for creating viral Up dance moves.

In February 2021, she made her big breakthrough when she posted an original dance routine to Cardi B’s popular song, UP along with fellow dancer Chris Cotter.

The rising star hasn’t been involved in any sorts of rumors and controversy. She stays miles away from such controversial acts that could hamper her career and personal life.

The content creator hasn’t revealed her exact net worth, salary, and other earnings in the media.

In the upcoming days, if she discloses anything regarding her income then we will update it.

The content creator stands at the height of 5 feet 5 inches tall and her weight is about 54 kg. Likewise, she has black hair and has a long braided hairstyle. Further, she has a dark brown pair of eyes.

Furthermore, she has over 25.6k subscribers on her self-titled YouTube channel.