MyKayla Skinner’s relationship at present is married. She exchanged vows with Jonas Harmer on 14 Nov 2019. Her husband is the sales team manager at Vivint Smart Home.

Before walking the aisle, they dated for several years and shared rings in Oct 2019. They announced their engagement via an Instagram post. 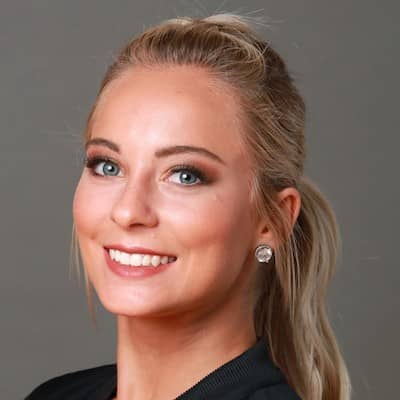 I hope to work on some upgrades before and after Worlds. Full-in dismount on beam. Triple double on floor. Play around with some upgrades on vault. And keeping that double-double dismount off bars

When I was deciding if I wanted to come back to elite and make a run for 2020, I definitely thought about all my options. I was really interested in being a specialist. But I feel like I could really help the team out by doing all four events. And I was so close last time. I really feel like college has helped me mature in my gymnastics and I feel better than ever

I will be finishing my degree after [the] 2020 season! I only have 24 more credits and it’s really important to me that I finish my degree.

Who is MyKayla Skinner?

MyKayla Skinner is an American artistic gymnast. She recently grabbed the attention by making to the 2020 Olympic Games in Tokyo.

Her birthdate is 09 Dec 1996 and she was born in Gilbert, Arizona, the United States as MyKayla Brooke Skinner Harmer. The name of her mother is Kym and her father is Chris.

As per the academics, she first attended Higley High School and then the University of Utah.

MyKayla Skinner is a role model for all the gymnasts for competing and winning several competitions. During her career, she participated in World Championships and grabbed three gold medals for the team in 2014, 2015, & 2019.

As of now, she is competing at the 2020 Olympic games representing her country the US. She came at fifth in the all-around and was named as the plus-one specialist due to her amazing skills.

She also announced her retirement after the game and planned to complete her degree from the University of Utah.

According to the reports of 2021, she collected a net worth of around $500k US. But, the yearly salary from her career is not calculated.

This Gymnast is keeping herself away from rumors and desperate scandals. But she was infected by a coronavirus in Jan 2021 and was hospitalized with pneumonia.

MyKayla Skinner’s height is 5 ft and her body weight is 47 kg. In addition, she has blue eyes and has dark blonde hair.

Also, she has her own YouTube channel with around 101k subscribers. Her TikTok fans have reached over 7k.