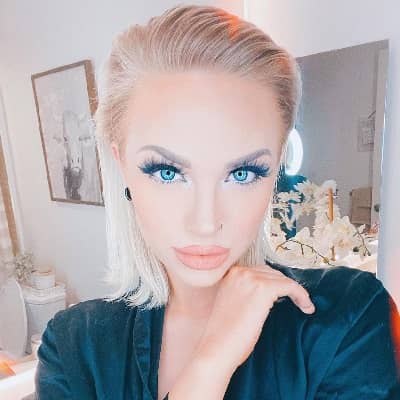 How long Mykie has been in a relationship? Who is her Boyfriend?

Mykie’s relationship status is taken. Since 2019, she is dating Anthony Padilla. Her boyfriend is a YouTube personality.

These two love birds live together and often share their pictures on social media. Their YouTube video titled Taking Off My BOYFRIEND’S ….. Makeup has been watched over 11m times.

Mykie is an American social media star and makeup artist. On her YouTube channel, she uploads content related to foundational teaching, product reviews, and makeup tutorials.

She was born on 01 Nov 1989 in Philadelphia, Pennsylvania, US to a Caucasian ethnic background. Her real name is Lauren Mychal.

The names of her father, as well as her mother, are not revealed.

Her descent and academics are not disclosed.

She started to use this YouTube on March 16, 2014, and at present, it is followed by over 4.07 million people. She first uploaded a video on her channel on 15 April.

Some of her most viewed videos are How ANYONE can be an Instagram model (catfish photoshoot), Makeup Artist Tries 5-MINUTE CRAFTS SFX Hacks, and Taking Off My BOYFRIEND’S ….. Makeup, HOW I SPLIT MY HEAD OPEN (Storytime With Pictures!), and more.

For her skills, Mykie received Beauty Vlogger of the Year in 2015. This award was given by NYX FACE Awards.

As per the reports, her boyfriend has a net worth of $3 million. Some popular web users’ net worth is,

She uploaded a video that shows the looks similar to the doctor who was dragged off United Airlines flight 3411. This content received several backlashes.

Regarding Mykie’s body features, her height is 5 ft 5 inches and her body weight is normal.

Moreover, the color of her eyes is blue and her dyed hair’s color is blonde.

Mykie as an Instagram star gained more than 2m followers. On this platform, she posts pictures that are loved by her followers as well as other viewers.

She is available on Twitter where she gained more than 454k followers. She joined this platform in April 2014.

Her Facebook has over 114k followers plus her TikTok id is followed by over 353k people.