Myleene Klass is a famous British actress, singer, model, pianist, and Television presenter who is best known for her roles in ‘Igor’ in 2008, ‘My Family’ in 2000 and ‘Lemon La Vida Loca’ in 2012. She is dating Simon Motson. 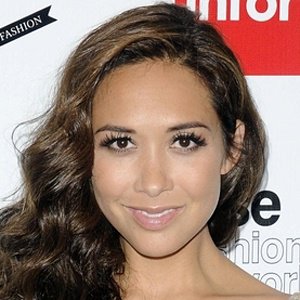 I eat the same foods but half the quantity.

I have total control over everything. I'm doing it all for me.

I can lose myself in the Universe.

What is the relationship of Myleene Klass?

Myleene Klass is currently in a relationship. She is dating Simon Motson, owner of Ley Line Studio.

They met the first time in autumn 2015. Simon has just split from his wife and he has two children from his previous marriage.

In February 2019, she announced that she is pregnant with Motson’s child and many of her friends and fans congratulated her. Then in Aug, she delivered their son and named him Apollo.

Previously, she was married to Graham Quinn. She revealed that she was sex-deprived and she was very much interested in sex during her 3 weeks with him.

They had a lot of unprotected sex which resulted in her pregnancy. She announced on April 1, 2007, that she was pregnant and they engaged after 4 years of on and off dating. They delayed the marriage until after their child’s birth.

Who is Myleene Klass?

Myleene Klass is a famous British actress, singer, model, pianist, and Television presenter who is best known for her roles in ‘Igor’ in 2008, ‘My Family’ in 2000 and ‘Lemon La Vida Loca’ in 2012.

She was born on April 6, 1978, in Norfolk, England. Her birth name is Myleene Angela Klass. She was born to a Filipino mother and an Austrian father.

Myleeneholds British citizenship and her ethnicity is a mix of Filipino and Austrian.

She joined Cliff Park High School in Gorleston and then shifted to Notre Dame High School, Norwich. After that, she joined the Guildhall School of Music and Drama.

Also, she spent the next two years at Great Yarmouth College and studied A-levels. Then, she got enrolled in a musical theatre class at the Royal Academy of Music, University of London.

Myleene Klass auditioned for the Popstars in 2001 and the show gave her the opportunity to become a member of a former pop band.

Also, she was chosen to become a member of the pop band Hear’ Say. The band won the show and the success gave their own TV show called Hear’ Say It’s Saturday.

In addition, she is also a presenter. She presented the music show ‘CD: UK’ produced by ITV. She co-hosted ‘The One Show’, ‘Ghost Towns’, ‘BBQ Champ’, and many more.

In addition, she posed for ‘Loaded Magazine in November 2004 and ‘Maxim Magazine’ in February 2006.

It seems despite being involved in several professions, she has not been awarded and nominated for her work to date.

She has an estimated net worth of around $15.5 million and she has earned that sum of money from her professional career.

Also, she earns around $2 million per year from her firm, Harperbailey. She adds her net worth from baby look sales, tv works, and clothing lines.

Also, paid 1.8 million euro to her ex-husband Quinn from the sale of their marital home. Then, she rented an 8k euro a month family home in Highgate, North London.

Currently, she is living with her children in a house in London worth 3 million euros.

Previously, she along with her husband, Quinn were joint directors of Klass’s former company named AvaHero Limited and handled her 11 million euro fortune but the firm was later liquidated and she was left with 1 million euro assets.

She was attacked by a group of teenagers in December 2005. The group dropped a bag of chips on her head and pushed her to the ground.

Also, they tried to take pictures of her on their mobile phones.

Myleene Klass has a height of 5 ft. 5 inches and weighs  54 kg. She has dark brown eyes and dark brown hair.

Singer Myleene Klass is expecting her third baby! Who is the child’s father?