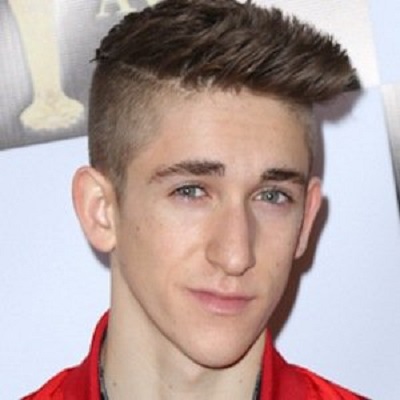 Myles Erlick is currently in a relationship. He is dating Briar Nolet since he was 13.

Briar is a Canadian dancer and actress born to Tamara Nolet and former Olympic gymnast Alan Nolet. She is famous for portraying the role of Rachelle in the Family Channel series The Next Step.

Who is Myles Erlick?

Myles is best known for playing series regular Noah in the world-wide hit NBC series, The Next Step.

He is also famous for playing the title role Billy in Billy Elliot the Musical on Broadway.

He was born on 27 July 1998  in Burlington, Ontario, Canada. He was raised by his mother, Francesca Nicassio and stepfather, Ryan Marshall. His biological father and mother were divorced when he was very young.

His mother, Francesca, is the owner and director of a boutique agency and artist management company, Stars Academy Talent, with offices in Toronto and Los Angeles. Her youngest son is from her second husband, Ryan.

Myles’ stepfather, Ryan, is a musician known as the core member of the famous band, Walk Off the Earth.

His elder brother, Tyson Erlick, is a music producer and musician known as the member of the band, The Revel Boys. He also performs for Electric Waves and Barefoot Shakedown.

His younger step-brother, Kingsley Erlick, is an eight-year-old child actor known for his role in 2015’s It’s A Wonderful Mic.

He began his career by performing in several local and regional musicals. Some of his earlier performances include in ‘Beauty and the Beast,’ ‘Annie Jr.,’ ‘Joseph and the Technicolor Dream Coat,’ and ‘High School Musical.’

He made his professional debut in May 2009 in Toronto production of ‘Anne of Green Gables’. He depicted the title role in ‘Billy Elliot the Musical’ in 2010 in Chicago.

He was invited to New York for five more days of the audition, where he had intense auditions in vocals, dance, gymnastics, and acting. After a long wait, he finally heard good news from the BETM team and was offered the biggest role of his career to date.

In 2011, he also portrayed a small role in the TV series ‘Flashpoint’ and he was featured in the blockbuster movie ‘The Hulk’ as well.

In addition, he depicted the character Noah in the hit TV show ‘The Next Step’ and in the year 2017, Myles participated in ‘The Big Ticket Concert’.

He was nominated for Young Artist Awards in 2016 for Best Performance in a TV Series – Recurring Young Actor for ‘The Next Step’.

Myles has dark brown eyes and brown hair. He has a height of 5 ft. 7 inches and he weighs 61 kg.

Know the backstory and more about World of Dance contestant Briar Nolet!