Nadhiya is a married lady. She is married to an investment banker Shirish Godbole in 1988. Nadhiya is one of the personalities who wants to keep her married life separate from any HOAX.

This may be the reason that she didn’t speak about any of her affairs in public or maybe she didn’t have anyone.

Nadhiya is happily married and has 2 children. First one is a son named Sanam and second one is a daughter named Jana. Nadhiya does not have any symptoms of separation with her husband. They stay happily at her home in Mumbai. 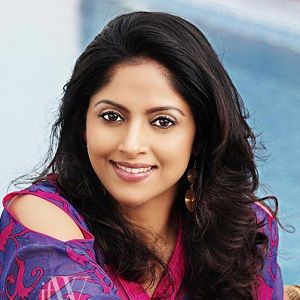 Nadhiya is an Indian film actress. She has given various hit films in Tamil, Malayalam, and Telugu.

She is also the brand ambassador for Arokya Milk and Thangamayil Jewellery. She is also famous for her role in Attarintiki Daredi for which she received Nandi Award.

Nadhiya was born on October 24, 1966, in Pali Hill, Mumbai, India as Zareena Moidu. Her father is a Muslim N.K.Moidu and her mother are a Hindu, Lalitha. She has one sister, Haseena.

Talking about her education, she initially studied at J. B. Vachha High School, Mumbai which is a Parsi Girl’s School. Later she was admitted to Sir Jamsetjee Jeejebhoy School of Art for her further studies.

She completed her B.A. in Communication and Arts specializing in Radio and Television but couldn’t study further due to her busy schedule in movies.

But after a few years, she did her associate degree when she was in the USA.

Nadhiya’s Career, Salary, and Net Worth

Nadhiya has a huge list of movies that she worked in. Her first role was in the Malayalam movie Nokketha Doorathu Kannum Nattu in 1984, where she worked with Mohanlal and Padmini. In 1995, she made her debut with the same movie which was a remake of Tamil.

She worked in the role of Sundari which was highly appreciated by her fans. After giving so many movies to the industry in just one year her popularity raised to another height. She was signed in various movies for the next year. In 1986 she was seen in both Malayalam and Tamil movies.

Given her spectacular performance in every movie, her fame took heights and she was one of the popular names in the movie industry. Her other movies include Irandil Ondru, Bazaar Rowdy, Vinta Dongalu, En Veedu En Kanavar, and Rajathi Raja. After these movies, she took a short leave from the movie industry and went to the USA, and there she even got married and settled with her husband and children.

Later in 1994, she acted in the Malayalam movie Vadhu Doctoranu. Her other movies were Chinna Madam and Rajakumaran. Nadhiya made her come back from a blockbuster hit movie M. Kumaran S/O Mahalakshmi working in the role of Mahalaxmi. Nadhiya succeeded in giving hit movies year after year and another blockbuster came in 2008. Sunday, in which she worked as Thangalaxmi. She can also be seen in many movies in Malayalam, Tamil, and Telugu languages.

Her work in the movie Bruce Lee – The Fighter as Vasundhara was also highly appreciated by her fans and was also nominated as one of the top movies of 2015. She can also be seen performing the role of IPS in the movie Girls and Thiraikku Varadha Kathai in 2016.

In 2017 she signed the movie Spyder which is still under production. Giving the movie industry many blockbuster hit movies and showing her acting skill she successfully managed to be on the list of millionaires but her actual net worth is still under review.

There may be a lot of rumors surrounding her as an actress like being rumored not working with certain actors, and or directors or getting caught in front of the camera in short dresses and all. But apart from it Nadhiya kept his image neat and clean and is not involved in any controversies or rumors surrounding her.

Moving towards her body measurements, she has a good height of 5 feet 7 inches (1.71m) with a body weight of 56kg. She has black hair color and brown eyes color. She has an hourglass body shape of 34-30-34 inches. Her dress size is 4(US) and her shoe size is 8.