Nadia is in a relationship with Peter Dugmore as of now. He is a former footballer turned into a gym and fitness expert. They were spending time together as seen in Jan 2022.

The model was married to James Ross Bartel. He is an Australian rules footballer. After dating for around 6 years, the couple married in 2014 on Bellarine Peninsula.

They also have two sons. Aston James Bartel was born on 27 November 2015. Likely their other son’s name is Henley Roy Bartel.

However, the pair divorced in 2019. It was also said that the divorce happens when Nadia found that Jimmy was dating another woman. 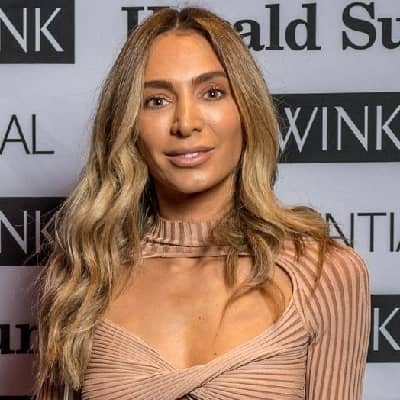 Who is Nadia Bartel?

Nadia Bartel is a well-known Australian model and entrepreneur. She is also popular for being the former wife of retired AFL footballer Jimmy Bartel.

Nadia Bartel was in the media after her video of snorting a white powder along with 3 women went viral on 2 September 2021.

The model was born on May 10, 1985, in Australia. Her birth name is Nadia Coppolino.

The model seems close to her family. She shares various pictures with them on her social media. Her father’s name is Tony Coppolino.

She belongs to the Caucasian ethnic group and her nationality is Australian.

Her siblings are Michelle Ring and Simon Coppolino.

She completed her education at La Trobe University. She has her BBA in public relations and advertising in the year 2007.

Completing her studies, Nadia joined Pacific Magazines Company in 2011. There she served as an Account Manager and advertising marine claire & InStyle. Likewise, she started her career in modeling afterward.

She is now a well-known Australian model ad also a fashion blogger. The model has appeared in various magazines, and Fashion weeks. She is a model for Westfield Group for the Winter Collection.

It was in 2012 when Nadia thought of starting her own business. She founded the blog, “Chronicles of Nadia“. Also, she has her business interior design under the same name.

In 2015, she opened her clothing brand “The Connection” and “Henne” along with her sister Michelle Ring. Nadia is the co-founder of tam removing spray company, “Sprays”.

Just in 2020 April, she appear on the cover page of Stellar Magazine. She is also engaged in various commercials and promotions of various popular brands.

Modeling to start her own business, Nadia earns decent money of around $7-$8 million.

Nadia Bartel was popular in the media when her friend Ellie Pearson accidentally posted a video on social media. The video consists of her and other 2-3 friends. Bartel was snorting a line of white powder in the video.

However, she also issued an apology on Instagram just 24 hours after the video leaked.

The model stands 5 feet and 10 inches tall and weighs around 59 kg. Similarly, she looks a beautiful face with hazel eyes and dark blonde hair.

She has maintained a perfect figure with the measurement of 34-24-36 inches.

Also, get to know about Domelipa, JeanCarlo Leon, Benedict Wong, and Arian Moayed.