Popular as 'Nadia Alexandra Bjorlin'. She is best known as 'Sonia' Hunter in the film Jack Rio (2008).

Nadia Bjorlin has been involved in several relationships till now. She was in an affair with Frank Kramer, a radio personality in 2001 but their relationship didn’t last long.

Later, she dated Bruce Wills, an actor but they also broke up in a short period of time.

She started dating Daniel Sadek, a producer around 2003 and they were even engaged. However, the couple broke up a few years later.

After that, she started dating actor Brandon Beemer in early 2007. They were together for seven long years and broke up in 2013.

Following year, she met Grant Turnbull in 2014-Valentines’ Day party while Grant was hosting the party. Then, they started dating each other. Nadia announced her engagement with her boyfriend in August 2014 and they got married on May 15, 2015, in Palm Springs. They together have a son named Torin Mathias, born on May 4, 2016. They are living happily together and there is no sign on divorce at all. 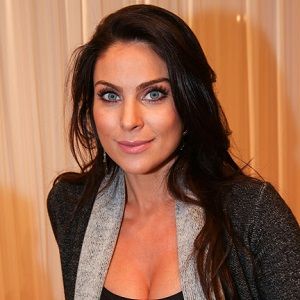 My family understands the pain of struggling with a loved one who's suffering from a blood-related cancer, and we seek to support those who are working to find a cure.

Showbiz can be cruel.

I believe in 'soulmates,' especially growing up and seeing how much my parents loved each other. They always said that they had been married in past lives, too.

Who is Nadia Bjorlin?

Nadia Bjorlin is a famous actress, model, and singer of the United States of America. She is popular as ‘Nadia Alexandra Bjorlin’. She is best known as ‘Sonia’ Hunter in the film Jack Rio (2008). She is also famous for her wonderful fashion sense.

Nadia Bjorlin was born on 2 August 1980 in Newport, Rhode Island. Her nationality is American and her ethnicity is a mix of Swedish Iranian. Her birth name is Nadia Alexandra Bjorlin.

She is the second child of Mats Ulf Stefan Bjorlin(father), a Swedish composer and conductor. Her mother Fary Bjorlin is an Iranian Interior designer. She has two brothers, Ulf Alexander Jr and Jean-Pau. She also has three half-siblings from her mother’s previous marriage.

Her family moved to Sweden and America several times due to her father’s work. She grew up in Stockholm, Los Angeles, and Florida.

She attended Interlochen Center for Arts and Boston University Tanglewood Institute to learn acting, music, and dance. She proved her excellence in voice, theater, dance, and music for which she was honored by the Institute. She also attended Palm Beach County School of the Arts along with her half-brothers. Later, her family moved to New York City and she attended Professional Children’s School. After graduation, she planned to make her career as an actor and singer. She is fluent in speaking different languages like  English, Swedish, and Persian.

Nadia began her career in 1999 as Chloe Lane in the popular soap opera Days of Our Lives, in which she appeared as a beautiful young girl. Her performance was highly appreciated and she became the audience’s favorite character. The same year, she appeared in the music video Shake Your Bon-Bon. Since then, Nadia has appeared in several series and movies.

In 2006, she was cast for the UPN series, Sex, Love & Secrets but the show was canceled. She made guest appearances in TV series and comedy shows like Complete Savages, Jake in Progress, and Out of Practice. In 2010, Bjorlin appeared in a guest role in CBS comedy Two and a Half Men and CBS drama show NCIS.

Nadia has also established herself as a successful model. She has worked as a model for several modeling pages. She has appeared on cover pages of several magazines including Runway magazine, You, In Touch Weekly, and Stun Magazine. In 2011, she was cast on the reality TV series Dirty Soap. She returned back to Days of Our Lives as Chloe in 2013.

Nadia Bjorlin: Salary and Net Worth

Talking about the rumors and controversy, there was a rumor that she is running for the role of Wonder Woman role. Besides this, she has not been in any sort of controversy as well as rumors.

Nadia’s height is 5 feet and 8 inches. She weighs around 58 kg. Her dress size is 10(US). Her body is described as an hourglass-shaped curvey body measuring 36-26-36 and she wears the bra size of 34C. She has blue eyes colored eyes and dark brown hair color. Her dress size is 4.5(US) and her shoe size is 7.5(US).