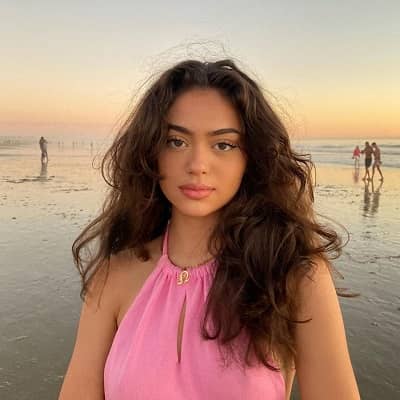 Nailea Devora is most probably single currently. Although she shared her relationship status her vlogs and activity on social media suggest that she isn’t dating anyone.

Nailea prefers to keep her love life private and so, nothing is known about her previous relationships and boyfriends as well.

Who is Nailea Devora Altura?

Nailea Devora Altura is a popular American social media personality and Youtuber. She is well known on Youtube, Tiktok, and Instagram thanks to her beauty and lifestyle-related content.

Nailea Devora Altura; also known as Nai, was born on the 20th of January, 2002, US. As of now, her age is 19. Her nationality is American and her ethnicity is mixed.

Nailea hasn’t shared the names of her parents. Still, we do know that they are both of Mexican origin. Nai has also featured them on her social media. She hasn’t said anything about her siblings though, so she might be a single child. Her childhood is also pretty much a mystery as Nai hasn’t shared much about it.

Nailea attended and has graduated from San Marino High School in California. Currently, she is pursuing further education at the University of California.

Devora is a well-known personality on Instagram. She started by posting attractive pictures of herself and also by posting updates on her personal life. She also posted a lot of lifestyles and travel-related content on Instagram.

And thanks to her gorgeous pictures and charm she soon gathered a lot of followers on the platform. As of now, she has over 3.8 million followers and the numbers are still rising.

Along with Instagram, Nailea is also very popular on Tiktok. She posts the usual lifestyle and beauty-related content along with lip-syncs and dances on her account.

Nailea also posts a lot of comedy videos and is adored by her fans. All of this has led to her gaining over 7 million followers on the platform. She also has an eponymous Youtube channel.

She started posting quite recently in 2019 and her content is quite entertaining. Devora posts a lot of beauty tutorials, lifestyle-related content, along with vlogs, storytimes, and challenges on her channel.

Due to her entertaining content and her popularity on social media, she has gathered an impressive 2.58 million subscribers on her channel.

Nailea has accumulated a net worth of roughly 1 million USD as of now. Her primary sources of income include Instagram, Tiktok, and Youtube. She hasn’t shared the details on her annual salary as of yet.

Nailea hasn’t involved herself in any negative rumors or controversies as of now. On the contrary, she is loved by her fanbase and has very few haters when comparing her to similar personalities.

Nailea stands at a height of 5 feet 6 inches and her weight is approximately 55 kilograms. She is really pretty and has a slim and petite figure. She hasn’t revealed her exact body measurements as of now. Her hair and eyes are both dark brown in color.

Get to know more about the lives of Corrado Martini and Avery Cyrus as well.