Nam Joo-hyuk is a renowned South Korean model and actor. 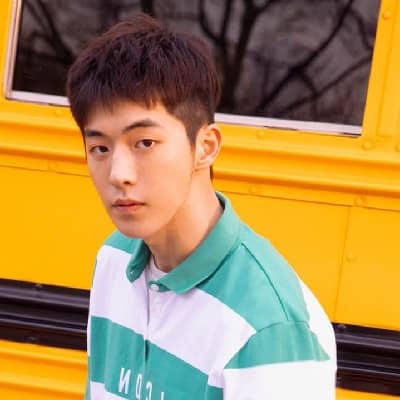 Nam Joo-hyuk is currently single. However, there is a dating rumor of Nam with his co-star Suzy Bae but the duo hasn’t spoken anything regarding the rumors.

In 2016, he was in a relationship with the actress Lee Sung-Kyung. The couple started dating after the shooting of ‘Weightlifting Fairy Kim Bok Joo’ finished. However, they broke up after dating a few months cites due to their busy schedules.

Who is Nam Joo-hyuk?

In March 2020, he signed with Management SOOP Agencies.

Nam was born in Dongsam-dong, Yeongdo District, Busan, South Korea on February 22, 1994. He was nicknamed Namssanf, Namhu, and Jweki. His name “Joo-hyuk” was given to him by his grandfather which means Shiny pillar.

The actor is an only child of his parents however, he hasn’t yet disclosed his parent’s details in the media. Nam holds South Korean nationality and belongs to Asian ethnicity.

While studying middle school he dreamt of becoming a professional basketball player. For three years he played basketball before pursuing a modeling career but left it after he suffered a shin bone injury and had to go through an operation.

In 2013, Nam participated in the Top Model contest in Seoul which was sponsored by K-Plus where he won the title and debuted as a model for a privately held high-end contemporary fashion house SONGZIO Homme‘s Spring/Summer 2014 collection.

The following year, he featured in music videos ‘200%’ and ‘Give Love’  of Akdong Musician in association with YG Entertainment. He has modeled for brands such as Hyundai, Socar, Le Coq Sportif, Aveda Korea, and more. That year, he also made his acting debut as a supporting role in the tvN drama, The Idle Mermaid.

Nam raises popularity after his appearance in KBS teen drama ‘Who Are You: School 2015′ in the lead role of Han Yi-an along with Kim So-Hyun and Yook Sung-Jae. In 2016, he starred in the SBS drama, Moon Lovers: Scarlet Heart Ryeo as Baek-ah. While working in the drama he met Ji Soo ever since the 2016 drama ended, their friendship has remained close.

The actors have also appeared together on the MBC reality television program, Celebrity Bromance. In 2018, he made his big-screen debut through the movie, The Great Battle where he portrayed the role of Young-Seok. Afterward, he also appeared in the 2020 romantic drama film Jose as Young-Seok.

Lately, he starred in the Netflix drama ‘Nurse Teacher Ahn Eun Young’ and tvN’s series, Start-Up in the year 2020.

To date, Joo-hyuk has not been part of any sorts of rumors and controversy that create headlines in the media.

Nam is a benevolent person it was reported that he donated about 30 Million Won to the Hope Bridge Association of the National Disaster Relief for the victims of the Gangwon Province wildfire in South Korea on April 6, 2019.

Nam’s primary resource of earning is being a Professional and successful Television and film actor. In addition, he has also earned wealth through modeling and endorsed major brands.

As per other online sources, he has an estimated net worth of $64 million. Further, his salary, yearly income, and other assets are still under review.

The actor has a fair complexion with an impressive height. He stands at the height of 6 feet 2 inches tall and weighs around 74 kg. Likely, he has black hair color with a black pair of eyes.