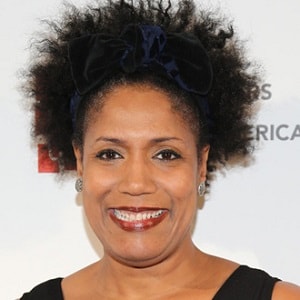 “At some point you may get fired, but don't worry you will learn from it”

Nancy Giles might be living her single life. She has not disclosed information regarding her past and present relationship status. She likes to keep her profile low.

Who is Nancy Giles?

Nancy Giles is an American actress and commentator who is famous for her appearance in the series ‘China Beach’ and on ‘CBS News Sunday Morning’. She has been awarded an Emmy Award two times, in 2013 and in 2015.

She was born on July 17, 1960, in New York City, New York, USA. She is currently 58 years old. Her father’s name is Thomas Jefferson Giles and her mother’s name is Dorothy Aileen. She has not disclosed information regarding her siblings and her childhood. Nancy holds American citizenship and her ethnicity is African-American.

She attended Oberlin College and graduated from there.

She was a member of the Second City Touring Company in 1984. She has been an important lesson for all the members of her community. She became the symbol of change and hope. She worked as the announcer and co-host of ‘Fox After Breakfast’. She is currently working as a writer and contributor to CBS News Sunday Morning.

She portrayed the role of Petty Marsh secretary in the film ‘Working Girl’ in 1988. She appeared in ABC television series for three seasons on ‘China Beach’ in which she portrayed the role of playing girl GI Frankie Bunsen and as hostile waitress Connie on the sitcom ‘Delta’. She made her guest role appearance in the show like ‘The Jury’, ‘L.A. Law’, ‘Law & Order’, ‘Dream On’, ‘The Fresh Prince of Bel Air’, etc.

Nancy along with her colleague, correspondent Erin Moriarty worked on two public affairs radio series, one for WPHT in Philadelphia and another for Greenstone Media.

She was awarded Daytime Emmy Awards for the category Outstanding Morning Program for ‘CBS News Sunday Morning’ in 2013 and in 2015.

She has an estimated net worth of around $5 million she has earned that sum of money from her professional career.

She has maintained her celebrity status so far. She has not been engaged in any rumors, scandals and in controversies in her career till date.

She has a height of 6 ft. 1 inch and she weighs 83 kg. She has got black hair and black eyes. Information regarding her body measurement, show size, dress size, etc. are unknown.