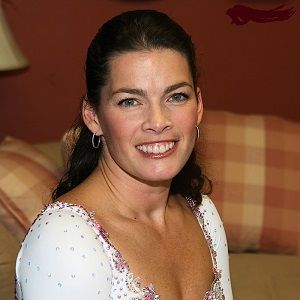 I do not have any pets. We travel too much.

I was thrilled one year when I was younger when not only did my brothers get hockey sticks for Christmas - but I did too!

My dad worked several jobs to pay for my expense in skating.

Nancy Kerrigan is a married woman since a long time. She is married to her former agent, Jerry Solomon. It was her first and his third marriage. The couple got married on September 9, 1995.

They together have three children named Matthew Eric Solomon, Nicole Elizabeth Solomon, and Brian Solomon. The couple has been married for over two decades now and their relationship is still going well.

Who is Nancy Kerrigan?

Nancy Kerrigan is a former American figure skater. She is the 1992 Olympic Bronze medalist, the 1993 US National Champion, the 1994 Olympic Silver medalist, and a two-time world medalist.

Nancy Kerrigan was born as Nancy Ann Kerrigan on 13 October 1969, in Woburn, Massachusetts, USA. Her nationality is American she is of mixed(English, Irish, and German) ethnicity.

She is the youngest child and only daughter of welder Daniel Kerrigan and homemaker Brenda Kerrigan. Her brothers Michael and Mark are former hockey players.

As per her education, She graduated from Stoneham High School and attended Emmanuel College in Boston to study business. She took up skating when she was six years old. She won her first competition at the age of nine.

She was coached by Theresa Martin until she was 16, after that, she began working with Mary Scotvold.

She won the bronze medal in the 1992 Olympics. The following year, she became the 1993 US National Champion. She also became the 1994 Olympic Silver medalist, and a two-time world medalist.

In 1994, Kerrigan was attacked with a police baton by an assailant hired by the ex-husband of her rival Tonya Harding. The incident became known as The Whack Heard Round the World. She recovered quickly from her knee injury and resumed her intensive training. After that, she won the silver medal at the 1994 Lillehammer Winter Olympics at the Hamar Olympic Amphitheatre.

Kerrigan retired from the competition in the year 1995. She was inducted into the United States Figure Skating Hall of Fame in 2004. She was also honored at Ice Theatre of New York’s annual benefit gala in 2008. Nancy has made appearances in several TV shows and programs.

Nancy Kerrigan: Salary and Net Worth

Throughout her successful career, she has accumulated a net worth of 8 million dollars and her salary is not revealed yet.

Currently, there are no rumors regarding her personal and professional life. It seems she has done her best job without harming others and has been a straight person in her life, for which she has not been in any controversy yet.

Tonya Harding having the Criminal report with Nancy Kerrigan and rumor going around about Tony not being Invited to watch Nancy on “Dancing With the Star”! Know both strory about being Invited and Not!!