Golfer Nancy Lopez is married and a mother of three. 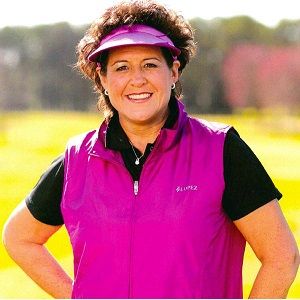 The simpler I keep things, the better I play

Do your best, one shot at a time and then move on. Remember that golf is just a game.

Nancy Lopez married twice in her life. Nancy got married to her long-term boyfriend Tim Melton who is a Houston sportscaster in 1979. They got divorced in 1982.

After separation, she began dating a retired Major League Baseball corner infielder Ray Knight. They got married in October 1982 but separated in 2009.

Who is Nancy Lopez?

Nancy Lopez is an American professional golf player. She has won 48 LPGA Tour events. She is best known as the LPGA golfer of all time.

Reflecting on her early life, she was born on January 6, 1957, in Torrance, California, United States. Her birth name was Nancy Marie Lopez.

She is the daughter of Domingo Lopez and Marina Lopez. Her father owned an auto repair business, and her mother tended the house and the children. She has one sibling named Roswell Lopez.

She was born and raised in Torrance. When she was just 13 years old she won her first amateur golf tournament. She used to play golf from her childhood days as her father used to guide her. She belongs to the Hispanic ethnicity and holds an American nationality.

Regarding her education, she went to Goddard High School in Roswell for her high school education. For university education, Lopez went to the University of Tulsa for two years.

At the time when she was a college freshman in 1976, she was given the title, All-American and Female Athlete of the Year for her play at the University of Tulsa. That was quite lucky for her as she won the Association of Intercollegiate Athletics for Women (AIAW) national intercollegiate golf championship.

Nancy Lopez started her golfing career at 8 years old, with her dad Domingo Lopez as her mentor. Lopez’s career as a professional golfer started from year around 1977.

Lopez became the winner of nine tournaments which included sequential five wins during her first full season on the LPGA Tour in 1978. Lopez was highlighted on the front of Sports Illustrated in July. She kept on winning titles on and on.

In 1985, Lopez secured five wins, five seconds, and five thirds. She was additionally the winner of the money title. She was awarded the Player of the Year Award. Nancy was also named Associated Press Female Athlete of the Year and this really was her second time to get that title.

She has been acclaimed just like the best player from the late 1970s to the late 1980s. However, she had not won many majors. Unfortunately, she would never win the U.S. Ladies’ Open.

She has won 48 LPGA Tour occasions which incorporate three noteworthy titles. She has been recognized as the main lady to win LPGA Rookie of the Year, Player of the Year, and the Vare Trophy in a similar season which was in the year 1978.

This player’s net worth is estimated at around $1 million. Moreover, she has an estimated salary of 42,000 USD.

There are rumors that Nancy is a lesbian, but she denied it. Despite this, she hasn’t been involved in any controversies yet.

Talking about her body measurements, Nancy Lopez has an average height standing at 5 feet 5 inches (1.65 m) and weighs around 61 kg. She has an average body with blonde hair and brown eyes.