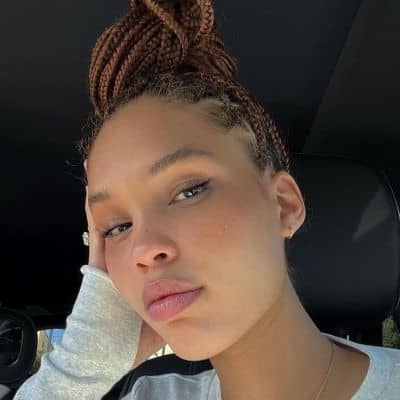 Who is the celebrity husband of Nara Pellman?

Nara Pellman is happily married to her husband, Lucky Blue Smith. They exchanged marital vows on a romantic beachside on February 1, 2020.

The ceremony was attended by his family and some close friends. The pair started dating in November 2019 and got engaged just a month later.

Who is Nara Pellman?

Nara Pellman is a model and Instagram star. She is best known for her fashion and travel content and lifestyle.

On the other hand, she is famous for being the spouse of Lucky Blue Smith. Her husband Lucky is an American model, musician, and actor.

The Instagram star was born on September 27, 2001, in Germany. As of 2022, Nara Pellman is 21 years old holding German nationality. She is of mixed ethnicity and her birth zodiac sign is Libra according to the astrological chart.

As of 2022, there is no information on Nara’s parents, biological siblings, or educational background.

Pellman has worked as a model for various modeling agencies. However, she has gained huge fame and recognition for being the partner of Lucky Blue Smith.

Lucky Blue Smith and his three sisters were scouted in Utah when he was just 10. He started his modeling career aged 12 after being signed by Next Management.

His breakthrough came after he dyed his hair from ash blonde to a platinum blonde color suggested by his agent. This decision changed everything. He did his first photo shoot at the age of 12 for Vogue.

In 2015, Teen Magazine named him the Model of the Moment. The same year, he also appeared on the Ellen DeGeneres Show.

In 2016, he starred as Bridger Jenkins in the movie ‘Love Everlasting.’ Also, he is in a band named The Atomics. He is the drummer of the band.

The net worth of Nara Pellman is estimated to be around $500 thousand. Her exact income and earnings have not been disclosed yet.

Besides that, her husband has an estimated net worth of around $1 million as of 2022.

Nara Pellman is a fashion sensation who is also taken as a fashion icon by the people. Regardless, she has not been part of any serious rumors and controversies.

The Instagram star stands at the height of 5 feet 10 inches weighing around 58 Kg. In addition, her body measurements are 32-23-36 inches. It means her bust size is 32 inches, waist size is 23 inches and hips size is 36 inches.

Her facial appearance includes brown hair and eyes with a brown complexion.

On the other hand, there is a youtube channel under her and her partner’s name, Lucky and Nara Smith. Their Youtube channel is enriched with more than 68.1K followers.