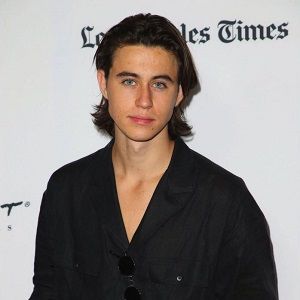 As humans, we're going to make mistakes. It's what makes us human, and most of the time, the most effective way of learning is from a mistake: Many of my early Vines and collaborations were with gay people: Designing a collection with Aeropostale was completely surreal.

The 20-year-old American social media star, Nash is an unmarried man. Currently, he is in a relationship with Taylor Giavasis. The couple started dating since April 2016.

Since their relationship began, they have maintained a perfect relationship with them. Moreover, the lovebirds also post their photos on social media accounts and also spotted many times in the public and media. Apart from her, Nash has never seen with anyone and there is not even a single rumor of him. Currently, Nash and Taylor are enjoying their love life and living elegantly.

Who is Nash Grier?

Nash Grier is a social media celebrity and internet sensation. He rose to fame after posting various videos on Vine. Currently, he has more than 10.8 million followers on Instagram as well over 4.67 million subscribers on YouTube. Furthermore, he has also appeared in the movie The Outfield along with Cameron Dallas and also featured in the music video “Mmm Yeah” by Austin Mahone.

Nash was born on December 28, 1997, in Greensboro, North Carolina, United States. Talking about his nationality, he is American and his ethnicity is unknown. He is the son of Chad Grier and Elizabeth Grier-Floyd. Furthermore, he has three siblings, Hayes Grier, Will Grier, and Skylynn Elizabeth Floyd.

From the beginning of his childhood, he had a keen interest in acting. Moving towards his education, he completed his graduation from Davidson Day School.

Nash began his career as a Viner when he used to post various videos. After rising to fame, he joined the touring group Magcon where fans could meet and interact with Internet personalities. During that time, Nash along with Taylor Caniff, Shawn Mendes, Jacob Whitesides, Cameron Dallas, and few more celebrities was in the group.

As he spent some time in the group, he left and started his own YouTube channel. Furthermore, he also posted several comic videos on YouTube. Some of his most popular videos include TRIVIA GONE WRONG, WISDOM TEETH, MEET MY SISTER, PROTEIN SPOOF, and a few more.

Additionally, he has also appeared in a couple of movies such as The Outfield along with Cameron Dallas, and a Netflix film You Get Me. Besides this, the Instagram sensation has also starred as a guest in several TV shows such as Good Morning America, Fox News, and The View. Moreover, Nash has also featured in Austin Mahone’s music video named Mmm Yeah in 2014. Currently, he has more than 10.8 million followers on Instagram as well as over 4.67 million subscribers on YouTube.

Being a famous social media star and actor, he pockets a massive amount of money from his profession. Currently, he has a net worth of $3 million.

So far, he has not won any awards to date. Although, he got a People’s Choice Award nomination for Favorite Social Media Star.

Once, Nash was dragged into a controversy after Taylor Alesia posted photos of Nash and his brother Hayes Grier where they were smoking. Furthermore, many of his fans also commented that he was smoking weed and that’s not cool at all. Although, Nash clarified about the news saying it was false. Apart from that, there are no rumors regarding his personal and professional life.

Nash has a height of 6 ft and weighs 75 kg. Moreover, he has a pair of attractive blue eyes and light brown hair. Besides this, there is not any information regarding his other body measurements.